REVIEW: The Statistical Probability of Love at First Sight by Jennifer E. Smith 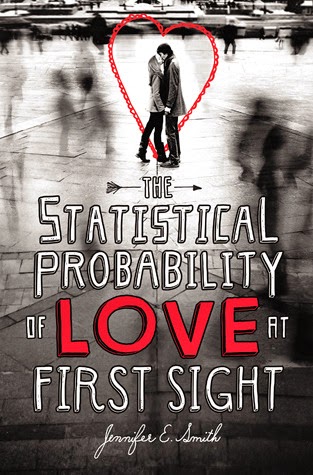 Who would have guessed that four minutes could change everything?

Today should be one of the worst days of seventeen-year-old Hadley Sullivan's life. Having missed her flight, she's stuck at JFK airport and late to her father's second wedding, which is taking place in London and involves a soon-to-be stepmother Hadley's never even met. Then she meets the perfect boy in the airport's cramped waiting area. His name is Oliver, he's British, and he's sitting in her row.
A long night on the plane passes in the blink of an eye, and Hadley and Oliver lose track of each other in the airport chaos upon arrival. Can fate intervene to bring them together once more?
Quirks of timing play out in this romantic and cinematic novel about family connections, second chances, and first loves. Set over a twenty-four-hour-period, Hadley and Oliver's story will make you believe that true love finds you when you're least expecting it.

It was easy for me to connect to Hadley. We had a pretty similar story of our parents splitting at roughly the same age. Though I may have been a year or so younger. For her, her dad goes off to work in England for four months and just..doesn't come back. For me, it was my mother and sadly it wasn't England. That would have been bloody fantastic. (See I woulda fit in when I was on holiday..Yep I'm just full of Briticisms.) So every little thing she went through and talked about in regards to her relationship with her father...I got it and was able to connect to this book on a deeper level than most books I've read.


Now, I  know I say this quite a lot...but...I am in love with Oliver. I mean it, I would leave all my other book boyfriends for this guy. He was 99% of the reason I was grinning throughout the majority of this book. He was just so charming and witty and funny and completely adorable. I did get a bit annoyed with him for a short time though because it seemed that he was always asking about her life but whenever she would ask him something, some of the stuff he would talk about but other than that he would most of the time give sarcastic jokey answers or would just shoot questions down completely and I sat there thinking how unfair! And then soon after they land and get separated, the bomb drops and everything starts to make sense and I lost it. I think I literally said "Oh no, no, no!" out loud. So, Oliver...I'm sorry for doubting your perfection. It was only for a moment!


But besides having two really great characters, behind them you have such a great love story. It's one of those stories you dream about having. Meet a gorgeous stranger at the airport. Ending up in the same row and most of the flight sharing stories and falling in love. [Insert girlish dreamy sigh here] Why couldn't my mother have run off to England? :(