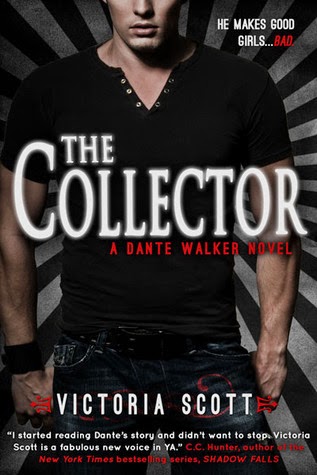 Dante Walker is flippin’ awesome, and he knows it. His good looks, killer charm, and stellar confidence have made him one of hell’s best—a soul collector. His job is simple: weed through humanity and label those round rears with a big red good or bad stamp. Old Saint Nick gets the good guys, and he gets the fun ones. Bag-and-tag.

Sealing souls is nothing personal. Dante’s an equal-opportunity collector and doesn't want it any other way. But he’ll have to adjust, because Boss Man has given him a new assignment:

Dante doesn't know why Boss Man wants Charlie, nor does he care. This assignment means only one thing to him, and that’s a permanent ticket out of hell. But after Dante meets the quirky Nerd Alert chick he’s come to collect, he realizes this assignment will test his abilities as a collector…and uncover emotions deeply buried.

There was so much hype for this book before it was even published. Everywhere I turned (in the lovely world of the internet, bloggers and goodreads that is) there was all out excitement for this book called The Collector. And girls everywhere were swooning over this guy that most of them didn't even know yet named Dante Walker. Though I couldn't blame them, I mean seriously, Dante freakin' Walker...the name just oozes sexiness. So I was curious and did some poking around and pulled up the blurb...

Yep. That's all it took. My next thought was...

But you had to worry and wonder, with all this hype and excitement.....would the book be able to hold up? Would it be any good? Good? No. Freakin awesome? Hell yeah! Pow! I don't think you see enough "Pow!" on a day to day basis. Ha. Anyway.

Hands down, Charlie is my all time favorite book heroine. Period. I mean she finds happiness and joy in anything. Seriously anything...jumping on the bed for crying out loud! How can you not love someone like that? And she was nothing like I anticipated her to be. But you know, that's okay. I liked this Charlie. Start to finish. And then there's Dante. He's an arrogant, self centered, cocky, materialistic, soul collecting demon from hell. Yeah I'm with you. I love him too. I don't think I've had as much fun reading a character in a long, long time. Even if he made me cry. Twice. Jerkface.

This book is filled with humorous moments and dialogue. You can really see Victoria Scott's  personality shine in this book. Most of us have been following her for a while before the book was released and you can see it in her blog posts and things like that. So even before I started reading it, I knew I was going to be laughing. A lot. Nothing else was predictable though, every time I'd think I had something or someone figured out I kept ending up wrong. I hate being wrong!

It's funny. Before I started blogging I never really paid much attention to acknowledgements. It was sort of a "Ehh. Books done time to move on." I don't know why doing this sort of thing changed that but I'm glad I did I cracked up at the end.

"Finally, to God, who has mad swagger just like D-Dub. Thank you for blessing me with everyone I just mentioned. Sorry Dante is so bad. He's getting better."

Ha! It came on my playlist right when I pasted the code. I'm so not joking...creepy O_O