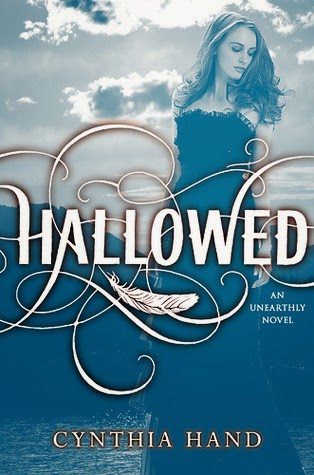 For months Clara Gardner trained to face the fire from her visions, but she wasn't prepared for the choice she had to make that day. And in the aftermath, she discovered that nothing about being part angel is as straightforward as she thought.

Now, torn between her love for Tucker and her complicated feelings about the roles she and Christian seem destined to play in a world that is both dangerous and beautiful, Clara struggles with a shocking revelation: Someone she loves will die in a matter of months. With her future uncertain, the only thing Clara knows for sure is that the fire was just the beginning.

In this compelling sequel to Unearthly, Cynthia Hand captures the joy of first love, the anguish of loss, and the confusion of becoming who you are.

It's hard to express and put into words how I feel after reading this book. With Unearthly being an intriguing and captivating start to this series, Hallowed has definitely kicked it up a notch and taken me along on an emotional journey I won't soon forget. That's not always the case when you have such an amazing start to a series like that. Sometimes when you start off that high you can't help but worry that the only place left to go next is down. Well, I hope you're not afraid of heights...

You know how it is in most "love triangle" types of series, how there always seems to be a real cut and dry for everyone. It's either Team BookBoyA or Team BookBoyB and you can usually find some really good solid arguments and evidence to back you up against the opposing guy. I can't do that with Christian and Tucker. They are both agonizingly good guys. I can't say a single negative thing about either of them they are book boyfriend perfection. Both! I mean for once I can actually understand what it's like for someone like Clara to be so torn about her feelings. I get it. I'm not screaming at the book trying to tell her what I think she should do. Or throwing my hands in the air and scoffing in disgust if something even the slightest bit romantic should happen with the guy who's team I'm not backing. Because by the end of the book, our minds are in sync. We both know who she needs to choose. You can't help but love the characters in this book. All of them, even the new ones.  Even through all the twists and turns that this book brings. As you learn more about everyone and secrets are revealed. Things get darker for some and others surprise you. There's still a love there for them.

I probably went through about half a box of tissues with this book. I'm so not joking. I was a total wreck. I love these types of book so much though. I love being so involved and swept away by a story that it can evoke that kind of emotion from me whether it be joy and excitement or even sadness and heartache. These are the kinds of stories that I can read again and again, and I can guarantee you that it will produce the same results from me each time. Hallowed has erased any doubt that these last two books in the series won't be able to hold up to Unearthly. It has me excited to crack open Boundless and see where Cynthia Hand leads me on this journey's end. I'll be sad to see it go, but happier than I was before it began.