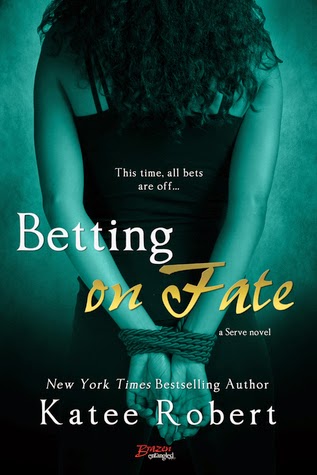 This time, all bets are off...

Penelope Carson loves to steal clients from Will Reaver. Yet something in her business nemesis's icy blue eyes makes Penelope...nervous. It certainly doesn't help that the man is the living embodiment of a Norse god. A controlled, powerful Norse god. Which she really should have remembered before she made a bet with him—because losing means becoming Will's personal submissive for a week.

There's nothing Will would like more than to have Penelope kneeling before him in complicit submission, her fiery dark eyes inviting him in. Challenging him. But their bet takes Will and Penelope deeper than either of them have ever been. Where control is an illusion, and boundaries are pushed aside. And where hearts become the stakes in a game that neither Dominant nor submissive can win...

The Serve series has quickly become a favorite of mine. Though I greatly enjoyed the first two books by Tessa Bailey, I feel like it was both Mistaken by Fate and Betting on Fate, both by Katee Robert, that really brought it to another level for me. This one by far being my favorite at this point.

It didn't take very many pages in for me to realize this book was going to be a whole lot of fun. Will and Penelope are, in lots of different ways, like carbon copies of each other. Add to that the fact that they did the same thing for a living and competed for clients and you have the makings of a fun rivalry. Some of my favorite fictional couples start out with that verbal sparring, glaring daggers at each other kind of situation. I love the sparks that build in these types of situations because when something does finally happen it's explosive and surprising and intense. Will and Penelope are no exception.

I adored Penelope and her confidence. I loved how even though she tended to be just as much as a control freak as Will was, that she would allow herself to give up that control and put her trust in Will. Even with their competitive history she felt a level of comfort with him. Of course she didn't give it up easily, the fact that she put up a fight and would push at his boundaries as well made me like her all that much more. Will was outwardly cold but once you get past all those walls and that mask he used to protect himself he had this very passionate and caring side. It's not like he was cold just to be cold. There are reasons that he hides behind the icy exterior and tight reign of control. Still he's become my favorite guy from this series.

I am really enjoying getting to know the Reaver family. Will and his twin Garrett were perfect alpha male deliciousness and their sister Sara has been a lot of fun as well. Though you get to see the more fun side of her in Garrett's book, but I am really hoping that at some point we get a book for her. Not necessarily in the Serve series since there's not enough to tell if she fits into that world. I would just love a chance to see Will and Garrett go overprotective, crazy on her!

So with two of her books now read, it's safe to say that Katee Robert has become a new favorite go to author for me. Looking forward to see what sort of books she has outside of the Serve series!

Thank you Entangled for the opportunity to read and review this book!