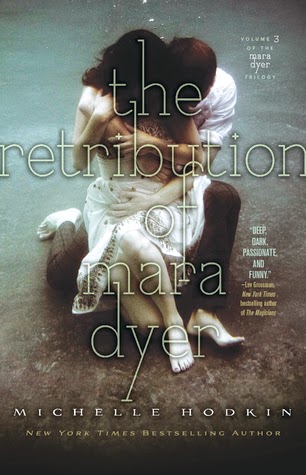 Mara Dyer wants to believe there's more to the lies she’s been told.
There is.

She doesn't stop to think about where her quest for the truth might lead.
She should.

She never had to imagine how far she would go for vengeance.
She will now.

Loyalties are betrayed, guilt and innocence tangle, and fate and chance collide in this shocking conclusion to Mara Dyer’s story.

It dawned on me when I had about 100 pages left in this book that it is going to be extremely hard, practically impossible even, to write a review for this book. At least one that's spoiler free. But I'm going to give it everything I have and see what happens. If you're reading this I manged to come up with something. Yay me!

I never expected to get as attached to this series as I have. But from the moment I picked up The Unbecoming of Mara Dyer, through every word and every sentence and every paragraph I fell deeper and deeper into this twisted, dark, hauntingly beautiful story. The intensity, the darkness, the complete mind fuckery has been steadily building since the very first book. It rarely lets up and I often found myself wondering if I myself was going to come out of this series sane. Truly I've had some very strange dreams.

At the start of each sequel I would think there's no way I could handle things getting any worse than they did previously. Yet there was no way in hell I could even think about putting them down. The more twisted it got the faster I would push myself to get to the next page. To say Retribution was the most shocking would be an understatement. The depths of darkness that this book went to had me absolutely hopeless throughout most of it. Doubting an ending could be possible that I would find satisfying.


Jamie held a slice in each hand and was looking back and forth between them. "I want to double-fist the shit out of this pizza."

Even when things look bleak Michelle Hodkin manages to sneak in moments that had me laughing out loud. I am in love with her writing style  You name an emotion and she has more than likely managed to pull that out of me within this series. I will read anything this woman writes. No, truly. If she published a book of nothing but old grocery lists I would be rushing to buy it. I have fangirled and shouted about how much I've loved this book or that book in the past, but this series was so different for me. It's that one. The one. The one that has me sitting here wondering how am I ever going to pick up another book and feel that same enjoyment and level of emotions. Yeah, it seems I'm slightly obsessed. Now if you'll excuse me I'm going to go wallow in this book hangover. They should make a patch for that, one that pumps you full of endorphins to help get you over the hump.