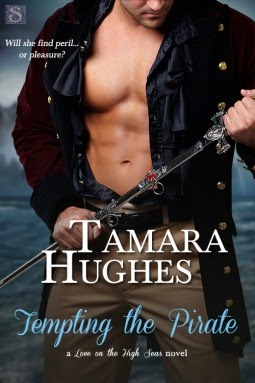 Charity Goswick thinks she is escaping an arranged marriage to a brute when she slips onto a ship unnoticed. Little does she realize that this is no honorable vessel of the King's Navy - it is a pirate ship. It's just a matter of time before she is discovered by a handsome rake of a pirate, who locks her in his cabin. And while she should be scared, her captor sparks the most unladylike feelings within her…

James Lamont is on the ship for one reason, and one reason only: to track down his brother. However, his spirited little stowaway certainly affords plenty of distraction with her many (failed) attempts to escape. And each time, the unspoken - and unbidden - passion between them grows stronger. But as violence and danger mount on the high seas, Charity will have to put all of her trust in the most untrustworthy of men... the arrogant pirate who just might steal her heart.


I have so much love for a good historical romance. One that can sweep you away to a period in time and make you feel as if you're there right along with the characters. Normally though I tend to stick to the regency London period when it comes to these types of romances and I practically never read books about pirates. However for some reason, even though the word pirate is clear as day in the title, I gave the blurb a read and felt like I needed to read this book. The storyline was lots of fun and I highly enjoyed it!

I felt like Tamara Hughes did a really good job creating the setting for this book. I could picture everything unfolding quite clearly on the high seas. Including a dangerous storm with things and people being tossed about and backstabbing and possible threats of mutiny among the ranks. You really get the full pirate experience.

While by the end of the book I really liked both Charity and James, in the very beginning Charity wasn't one of my favorite characters. It wasn't her fault really though since one of the people who raised her was very "don't trust men" "men only want one thing" just very anti-male. Stuff like that feels annoying to me after a while especially when you're dealing with women of this time period who are very sheltered and naive to a point. She goes through a lot of changes throughout the book though and by the end she was kicking some major ass!

James's storyline is what had me sucked in the most. The lengths he goes to in order to find information and hopefully find his missing brother were heartwarming and admirable. He gives up a lot and puts himself in terrible danger as well. Though I do feel like there wasn't a complete feeling of closure when it comes to his story. I guess maybe it's just left open enough and we're supposed to use our imaginations? Oh well I know how it ends in my mind and I still found it highly entertaining.

Sometimes you take a chance and go outside of your usual likes and it can end up paying off like Tempting the Pirate did. Wasn't sure how else to state that because I don't exactly want to say out of my comfort zone because this wasn't a case of it being a threat of discomfort to read by any means, it just isn't my normal cup of tea so there was great relief and a bit of surprise with how much I liked this book.

Thanks go to Entangled Publishing for the opportunity to read and review this book!