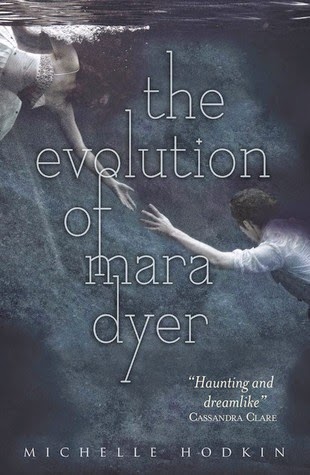 Mara Dyer once believed she could run from her past.
She can’t.

She used to think her problems were all in her head.
They aren't.

She couldn't imagine that after everything she’s been through, the boy she loves would still be keeping secrets.
She’s wrong.

In this gripping sequel to The Unbecoming of Mara Dyer, the truth evolves and choices prove deadly. What will become of Mara Dyer next?

This review will probably be on the shorter side because it's going to be hard to put my thoughts into words without spoiling anything. Plus I'm not even really sure what it is I even am feeling at the moment. All I do know for sure is Michelle Hodkin...is freaking brilliant!

Time was supposed to heal all wounds, but how could it when Jude kept picking the scab?

First of all I finished The Unbecoming of Mara Dyer feeling like there wasn't any way to top it. I was pulled in immediately and my emotions were pulled up to the highest of highs and brought down so low I wasn't sure I'd be able to claw my way back to the top. But that was just the first book in this series and now after reading this one? That was all a simple child's bedtime story in comparison. I'm stunned. I'm shocked. I feel emotionally drained. And it's taking every last shred of willpower I have to be sitting here typing this and allowing myself to clear my thoughts, instead of picking up the last book and starting it immediately. Couldn't be topped? Pfft! I'd laugh at myself if I wasn't so drained.

My affection for these characters has only deepened. Especially with both Noah and Mara's brother Daniel. Daniel's unwavering support and faith in his sister at one point even brought me to tears. And Noah? I can't even describe it! No matter what Mara wants to try in order to figure out what's happening to her he's there solidly supporting her. If she said she wanted to...I don't know, travel deep into a jungle and visit some shaman or witch doctor or something that most of us would just look at the person and laugh and think you can't be serious? Noah would charter a jet and fly her there then hold her hand as he hacked his way with a machete through the jungle to find whoever she was looking for. He's the guy who will move heaven and earth for her, never once doubting what she said to be anything but reality. And I'll admit there have been plenty of moments through this series so far that I often doubted her myself and had to wonder if things were actually happening or not.

But no one could protect me from myself.

I still have no idea what's going on! If one question gets answered, it brings with it a whole fresh set of new ones to have me totally baffled. There was even a darker edge to this one. I was even more so on the edge of my seat as the story twisted and turned and really messed with my head and even had me a little bit freaked out. I'm so not joking! Especially when I was reading it late at night. I was so very much pulled in and emotionally invested in the story that it had me on edge. I'm both excited and really worried to pick up the last book. Part of me just doesn't want it to end period because I'm so hooked. Another part of me is just praying that it ends well since my recent track record with series enders is...not so good. *Deep breath* I'm going in...

Huh...look at that. This review is longer than I thought it'd be!