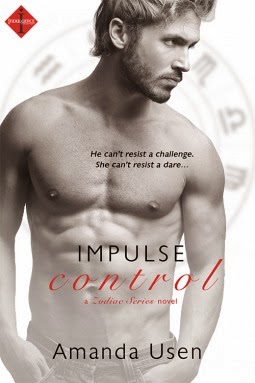 Survivalist Russ Donovan is the toughest man in America, with a reality TV show to prove it. Now he’s been strong-armed into filming a new show with dainty lifestyle expert Susannah Stone. But while “At Home in the Wild” could mean millions for his family’s charity, Russ plans to put Little Susie Homemaker to the test—in the Adirondack Mountains in the dead of winter. And there's no way she'll be able to hack it...

Susannah is tougher than she looks. She's had to fight her way through life, and there's no way she'll let a bossy mountain man show her up. When she gets him on her turf, he’s in serious trouble. But now she's run into a bit of problem. Because no one—least of all Russ and Susannah—expects sparks to fly both on camera and off. And now everyone will see their risqué rivalry break all of the rules...

Have I told you lately just how much I enjoy books where the main characters don't get along/have some sort of rivalry/are enemies before hand?  It always cracks me up and puts a huge smile on my face watching two people with an obvious intense chemistry fight their feelings, and each other. Just reading that blurb let me know that I had to read this book and I did end up enjoying the storyline a lot!

The characters were fun up to a point. Susannah had zero self esteem. Okay I somewhat take that back. When it came to her show At Home and cooking and being a mom she was full of confidence so I really enjoyed her in that aspect. It's just that part of her character's thing is that in her past she was really torn down from a relationship and made to feel unworthy and a failure in basically every other area of her life. And she's one of those women who will bend and reinvent herself to please others. I can't stand women like that. I always feel like shaking them and screaming have an opinion of your own!! But once I pushed past that she really was a fun character. Watching her grow and gain confidence.

Russ, well, I took issue with him as well. I loved the fact that he was very alpha male. And there have been plenty of times in which a guy who is real cocky will crack me up and make me fall for him anyway but it was too in your face with Russ. Too much of the all-the-women-from-my-past-who-screamed-my-name-never-complained for me. And yes...he did say something very similar to Susannah at one point. He's actually such a great character. Very much a Bear Grylls type of a guy, has that type of a survival reality show going on. I loved everything about him except that one thing so he still made me swoon on more than one occasion!

The plot was such a fun concept and it was executed really well. I loved the idea of someone who's very Martha Stewart like having to do a merged reality show with someone very Bear Grylls like. Seeing both Russ and Susannah try to live in each other's worlds made for lots of fun moments. Not to mention the oh so steamy ones. Holy chemistry Batman. These two have got it! I'm glad I gave this one a chance, very worth it in the end!

Thank you Entangled Publishing for allowing me the opportunity to read and review this book!