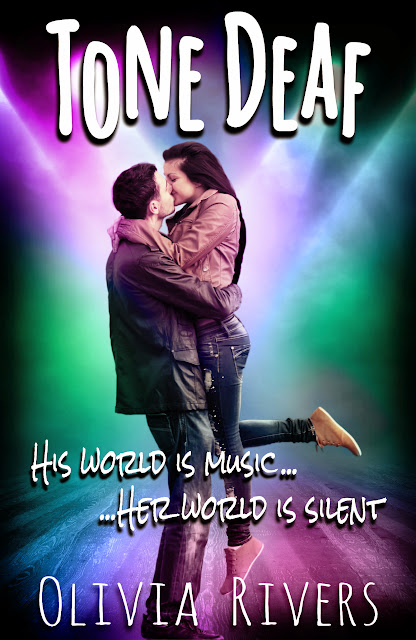 His world is music…
…Her world is silent.

Ali Blinde was a prodigy destined to become one of the greatest musicians of the 21st century.

Until the brain tumor struck.

Now seventeen, Ali lives in a soundless world where she gets by with ASL and lip-reading. So when she meets Jace Beckett, she thinks he’s her worst nightmare come true. Jace is the lead singer in the wildly-popular band, Tone Deaf, and he’s exactly the kind of success-story Ali hates and resents.

Nineteen-year-old Jace has it all: fame, money, and any girl he wants. Every night on tour brings a new performance and a new girl, which is just what he needs to avoid the pain of relationships.

But when Jace learns Ali is being abused, he reluctantly proposes a solution: Run away with him and his band as they tour the country. With freedom in sight, Ali takes the offer. Immediately, she’s swept into a world filled with wild punk music, wilder musicians, and maybe—just maybe—love.

Olivia Rivers is the author of six novels, ranging in genres from Epic Fantasy to Contemporary Romance. Along with being a writer, she’s a freelance digital artist, a literary agent assistant, and a high school student.  She’s a nerd at heart, and is a hopeless fan-girl for Doctor Who and Arrested Development. Olivia lives in California with a dog who thinks he’s a cat, a cat who thinks he’s a dog, and a kitten who is just generally confused.