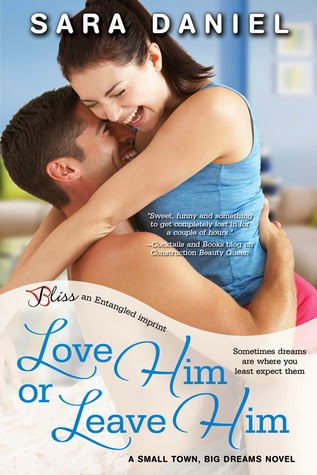 
Sometimes dreams are where you least expect them

Connor O’Malley and Becca Sanders were once high school sweethearts, ripped apart by rumors in the small town of Kortville, Illinois. Connor left to join the military, and Becca stayed, waiting for her younger brother to graduate so she could live her dreams of traveling the world. But now that Connor's back as the town sheriff, Becca finds herself struggling to resist the too-handsome man who once broke her heart.

Connor loves Kortville—its quaintness keeps at bay the painful memories of Afghanistan he’s sure make him unworthy of any woman, particularly the beautiful brunette he’s always secretly dreamed of a future with. But when a scandal rocks the town, suddenly Connor and Becca must trust in each other if they want to weather this storm…and come out on the other side of it together.

I received a copy of this book from Entangled Publishing in exchange for an honest review.  I really hate having to write reviews like this. Let me start of by saying that this is strictly my opinion and honestly if the blurb interests you at all give it a try because while there are some things I liked, for the most part, this book wasn't for me.

I had a difficult time liking any of the characters. Becca started out alright but as the book went on I felt like she was too "knows what's best for everyone". Sometime she would voice her opinion but a lot of it was like an inner monologue  Those types of people I have a hard time dealing with in real life and so when I find one in a book, which is supposed to be an escape, it grates on me.

Conner for the most part wasn't bad either. What I found to my disliking with him though was how overly dramatic he was at times. I understand he has PTSD and I'm not trying to blow that off on overreacting. There were some very PTSD reaction moments that were understandable. But when a building gets spray painted, vandalized, and he starts going through these internal thoughts about all the people he's let down which now included the guy who's store was vandalized, and how when he let people down, people died... it just got to be too much. And it wasn't just one time. Even for someone with PTSD he didn't react normal to situations.

One of the things I enjoyed was the relationship between Becca and her younger brother Toby, whom she's raising. It was very real. Real in the fact that they both had some resentments towards each other due to their situation. Becca for having to give up her dreams and be what she considered "Stuck" in a small town and not being able to follow her dreams of travel. And Toby for having to be raised by an older sister and knowing that he was the reason she was stuck and how much she couldn't wait til he graduated so she could take off. Their interactions were exactly how one would expect of that kind of a situation. It was nice watching them grow and struggle to eventually mend their relationship.

I wish I had more positive things to say. I really do, but even the whole scandal that rocks the town situation seemed like a bit of a stretch to me. I hope others have a different experience with this book than I did.