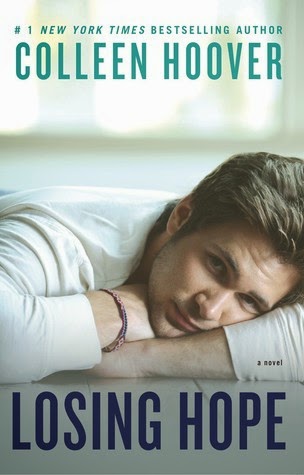 In the follow-up to Colleen Hoover’s #1 New York Times bestseller Hopeless, the charming and irresistible Dean Holder tells the passionate story that has melted thousands of hearts.

In Hopeless, Sky left no secret unearthed, no feeling unshared, and no memory forgotten, but Holder’s past remained a mystery.

Still haunted by the little girl he let walk away, Holder has spent his entire life searching for her in an attempt to finally rid himself of the crushing guilt he has felt for years. But he could not have anticipated that the moment they reconnect, even greater remorse would overwhelm him…

Sometimes in life, if we wish to move forward, we must first dig deep into our past and make amends. In Losing Hope, bestselling author Colleen Hoover reveals what was going on inside Holder’s head during all those hopeless moments—and whether he can gain the peace he desperately needs.

I received a copy of this book in exchange for an honest review. I started Losing Hope already in love with Holder and Sky, from reading Hopeless, and their beautifully written story that touches on a very delicate and sensitive subject. Every time I dive into a Colleen Hoover book thinking I'm fully prepared for the emotional assault that she is sure to lay on me, I always find out that I'm sorely mistaken. This book was no exception.

I know there's those of you out there, unlike myself, who have a hard time with authors putting out books like this from the male characters POV. "Why would I want to reread the same thing from someone else's perspective?" I totally get that, I know quite a few people who once they've read, seen whatever it may be, something that's it. They don't want to revisit it. Well let me just say that this book is quite different, and yet the same. You, of course, are going to be seeing scenes that you've read before, but you're also going to see a whole new side of Holder.

I thought it would be easy you know? I know what is going to come of these two. I've lived it all before. I couldn't possibly love this story more could I? Wrong. I think reading Holder's side was just that much more difficult. He's living through double the pain. Double the heartache. This horrific and tragic event has touched his life in more ways that can be imagined, with two of the people he's loved most in the world. It's been almost two weeks since I've finished this book and I'm still feeling everything, right there on the surface, as if I just finished it hours ago. If it's one thing Colleen Hoover is good at, it's writing things that stick with you for quite a while.

I pull the pen out of the spiral binding, then press the tip of the pen ot the paper and begin to write her a letter. I don't even know why I'm writing her.


These letters really killed me. They reached out and stroked a place in my soul I didn't know existed and turned me inside out in a puddle of tears and emotion. The emotions Holder expresses in his writing to Les are just so raw. Whether it's anger or despair or hope or even a few that made me chuckle. It was pure Holder and gave great insight into his thoughts at the time.

One of the things I loved from reading this side of the story was getting to see the interactions with Holder and Breckin and also Holder's friend Daniel.  There wasn't a lot but the scenes with those boys had me laughing. Daniel is one of those larger than life people who isn't afraid to throw himself out there and be the center of attention, he sort of thrives on it. It's very entertaining.

He leans forward in his chair and glares at her. "I'll tell you what's wrong with me. I'm pissed that you're a girl because if you had a dick, I'd be punching you in your disrespectful fat mouth right now."


But best of all is getting to witness this amazing and heart warming love story through the eyes of Holder. And boy did I fall hard for him. Again. It's hard not to. You get to see how after all those years even though he was so young at the time, losing Hope really affected him and he never once gave up or quit thinking about her. How amazing would that be to have a guy be that moved, devoted, dedicated, loyal to your memory. All of that! Sigh. Only in fiction.

I wonder if it's possible for people to fall in love with a person one characteristic at a time, or if you fall for the entire person at once. Because I think I just fell in love with her wit. And her bluntness. And maybe even her mouth, but I won't allow myself to stare at it long enough to confirm.


If you fell in love with Hopeless, and I can't see how it's even possible that you couldn't have, then you really need to read Losing Hope. Even those of you who don't like the same book written from the male MCs POV because trust me this isn't just a simple retelling. And don't even go in trying to think you're ready, because you'll never be ready. Oh and grab a box of tissues. On second thought...better make it two.