REVIEW: The Impact of You by Kendall Ryan 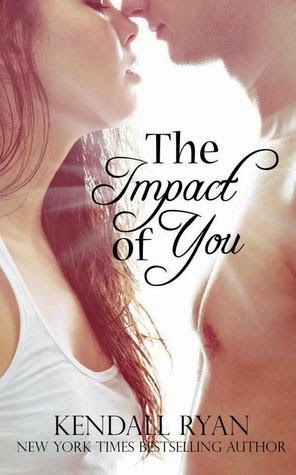 
Needing an escape from her past, Avery chooses a college where no one knows her. Keeping a low profile was the plan, falling for the intense frat boy, Jase wasn’t. Yet she can’t deny how alive she feels when he’s near. Even as common sense implores her to stay away, her body begs her to get closer.

Jase, numb from his own family drama, has grown bored with weekends fueled by nameless girls and countless bottles when he meets Avery. Helping her cope with her past is better than dealing with the bullshit his own life’s served up. Determined to drive away the painful secret she’s guarding, he appoints himself her life coach, and challenges her to new experiences. Getting close to her and being the one to make her smile are simply perks of the job.

But when Avery’s past boldly saunters in, refusing to be forgotten, can Jase live with the truth about the girl he’s fallen for?

Recommended for 17+ due to mature themes and sexual content.

You know how sometimes in the movies someone is sitting down getting ready to do something they don't want to do and they're highly distracted by other things. Then there's a few minutes worth of a montage of them doing things like, oh I don't know for some bad examples let's say; playing with their hair, messing with things on their desk, stacking things, drumming their fingers. Just stupid stuff you know? Like anything but what they should be doing? That's me with this review. Sigh.

The Impact of You was one of our #GwB weekend reads with: Jessica from Lovin' Los Libros, Danielle from What Danielle Did Next, Wendy from Book Scents, Tonya from lilybloombooks, Trish from Between the Lines, Chelsea from Starbucks & Books Obsession and CeCe from CeCe's Steaming Mug of Books. To be honest I don't even think everyone finished or even started it. Some of us had a busy week and couldn't start right away and I think from the responses by the rest of the group sort of wrote it off.

I was really excited to start this. People are always raving about Kendall's books and so I've been wanting to  give one a read. Unfortunately, this one fell flat for me. I had a really hard time finding anything to like with either Avery or Jase. Avery was all over the place and couldn't seem to make up her mind one way or the other what she wanted. Jase and I are just friends! Oh I but I don't want any other chick around him! Oh am I jealous? No we're just friends! And for someone who's "big secret" had her untrusting and keeping guys out and whatnot she sure attached herself to Jase pretty freaking easy. She was a total contradiction from start to finish.

And Jase. Oh Jeebus Jase. Seriously I'm all for bad boys. But there wasn't a single thing attractive about this guy. He was a complete douche! I mean had some "totally hot guy" that's slept with practically every chick on campus purpose to become my "life coach" I probably would have punched him in his arrogant face. I was almost ready to give him a chance up to right about then. And then it was all downhill from there. I mean he's supposed to like this girl and one of his "Lessons/Dares" is to tell her to go kiss some random guy at the frat party? What the hell is that?? And his complete inability to make his ex Stacia go adios, come on dude grow some balls! Oh and then the guy with the type of past he has, gets all judgmental on her when he finds out her secret. Yeah he wasn't very likable at all.

I wanted to like this book, I really did. And maybe with a different set of characters who weren't so wishy-washy or irredeemable it could have had some great potential. I probably could have enjoyed it more. Because the secret had potential to make for some intriguing plot twists. Hopefully the next book of hers I read will turn me around because I haven't given up yet. E for effort, characters just got in the way.