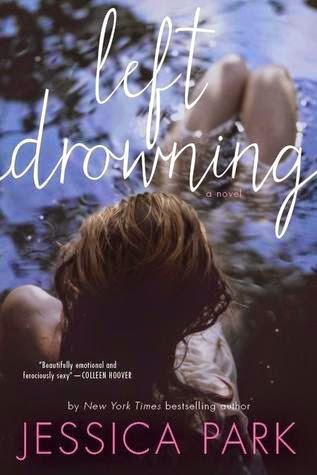 What does it take to rise from life’s depths, swim against the current, and breathe?

Weighted down by the loss of her parents, Blythe McGuire struggles to keep her head above water as she trudges through her last year at Matthews College. Then a chance meeting sends Blythe crashing into something she doesn’t expect—an undeniable attraction to a dark-haired senior named Chris Shepherd, whose past may be even more complicated than her own. As their relationship deepens, Chris pulls Blythe out of the stupor she’s been in since the night a fire took half her family. She begins to heal, and even, haltingly, to love this guy who helps her find new paths to pleasure and self-discovery. But as Blythe moves into calmer waters, she realizes Chris is the one still strangled by his family’s traumatic history. As dark currents threaten to pull him under, Blythe may be the only person who can keep him from drowning.

This book is intended for mature audiences due to strong language and sexual content.

I received a copy of this book in exchange for an honest review. I can't even begin to describe the emotional struggle that is Left Drowning. I both loved and hated it and if I could have given it one hundred stars I would. How's that for confusing?! There was something about it that touched me on so many levels. It as an overwhelming tidal wave of emotions and it was all I could do, especially towards the end, to attempt to just hold on and ride those waves out.


It started off so strange in a humorous sort of way. It wasn't at all what I was expecting. We meet Blythe as she's highly intoxicated and trying to get into her dorm. She makes quite a first impression on me. I found myself giggling and instantly drawn in. But then the tone quickly shifts and we get a real grasp on who Blythe truly is. A very sad, self depreciating damaged and depressed girl. She was very easy to like and feel for. She's been living in a numb, almost lifeless state in the four years since her parents have passed.

I have mastered the art of melancholy.

It's in this drunken and depressive state that she makes one small decision that changes everything for her. One step that's both small and huge in the grand scheme of things. She vows to stay sober for at least twenty-four hours. That turns into a second day and at the start of this we meet my absolute favorite person in this book. Sabin Shepherd. To be perfectly honest I thought he was completely insane at first. The way Blythe and Sabin meet, I didn't know whether to laugh or yell at her to run.  He quickly wound his way around my heart with his goofy, larger than life, theatrical persona and never let go. This guy will steal the scene every time he appears.

Sabin storms his way to our table with the fakest angry look that I've ever seen. "I cannot believe that you have betrayed me like this, my brother. We will duel over this princess, and I shall be victorious."

Chris rolls his eyes. "Hi, Sabin. How are you?"

It's through the whirlwind first encounter with Sabin, in her senior year of college, that she makes her first friend and takes the first step in starting to feel again.


Later that same day she ventures off campus for once and takes a stroll to the nearby lake and it's there that the most significant person comes into her life. Christopher Shepherd. Their first meeting was probably one of the sweetest meetings that I've read to this point. Chris is sort of this wise and stoic guy who seems to really have it together, but in reality he's got even more problems and secrets than Blythe does herself. Yet there's a connection there that's instant. It's comforting and confusing at the same time.

I clear my throat. "And where are you going today?"

I look up and frown. "Why not? Is the food that horrible?"

Christopher leans back in his chair. "No. I'd rather stay right here with you."

The story of Blythe and Chris is so intricate, if you read it closely and carefully there are so many connections spread throughout. Every time I stumbled across one my heart would pound as I made the them. There was only one that slipped past me but once I found out it actually made more sense then what I was thinking. Their story made me laugh and cry, there were times I was absolutely heartbroken and angry. It was too much at times, the heartbreak and anger could be overwhelming and I almost didn't want to go on. The not knowing would have killed me though and it kept me turning pages.


The characters were brilliant and the best part of the book. I fell in love with each one of them. Blythe and her brother James, the entire Shepherd family; Christopher, Sabin, Estelle and Eric, even Eric's boyfriend Zach. Each having such an important roll in this story. The family that they created was so touching I wish I could have been a part of it. The way they save and support each other was amazing to read, it made me want to know these people or people like them. I fought sleep trying to finish it and once I did I was so sad that it was over. I cannot recommend this book enough.