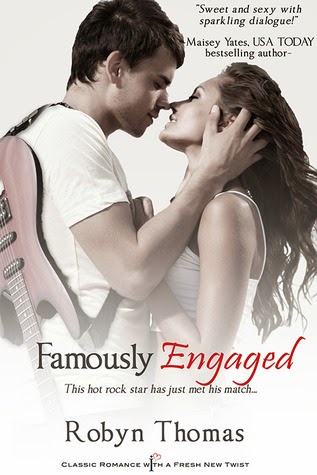 A chef and a rock star. They couldn’t be from more different worlds…

Rock star royalty’s favorite son, Jake Olsen, couldn’t help but interfere after listening to his future brother-in-law talk non-stop about his ex-wife, Beth Carlisle. Jake decides that the only way to get the groom’s mind off his ex-wife is to give her a fake fiancé.

Before Jake can convince Beth of his plan, he's forced to move in with her to avoid the paparazzi. Their instant attraction makes for a sizzling "first date", but soon Jake’s fame gets in the way and Beth wants out. Too bad Jake's figured out just why her ex is so obsessed with her, and he's afraid he's not going to be able to give her up either.

Now it's up to Jake to convince this chef together they make the perfect recipe.

I received a copy of this book in exchange for an honest review. It's always difficult writing these types of reviews but this book and I just did not get a long. At all. My first issue was that I found the story itself to not be believable, in any way. Not even in a fictitious book way. We have a "Rock God" (and that term was used often), Jake, whose half sister, but she doesn't know  they're related she just thinks she works for him, Skyla is getting married to Brad, whose ex-wife Beth is his "best friend" and Skyla's maid of honor. Yet Brad is constantly calling, popping over and keeping close tabs on Beth because her mom was sick/dying and Brad thinks it would be wise if either Skyla or himself move in with her to make sure she's okay....What a mess. And so being the protective half-brother, and curious about her anyway after seeing a picture of her, Jake quickly steps in and decides to fly from England to Australia to move in with Beth until the wedding. I had a hard time following at times and had to reread quite a few paragraphs. Just that description wasn't easy to follow and gives me a headache all in itself!

Beth is supposed to be grieving. So when Mr. Rock God shows up on her doorstep initially she puts up a bit of a fight at having him intrude on her life, which really doesn't last long especially after a situation with the paparazzi occurs. The strangeness just goes on from there. I mean at one point she's practically begging him to come comfort her until she falls asleep. I just didn't get it. Rock star or not it was just weird because it's not like she was a groupie she didn't have a clue who he was until he pointed it out himself.

Jake was a bit too arrogant for my taste. His constant reminders of who he was got to be a bit much. And like I said in the beginning, the words "Rock God" were used far too often in reference to him. At one point when he was interally brooding over the differences between his life and Beth's he referred to himself as famous, talented and revered.

I really wish I had more positive things to say about this one but it really wasn't for me. And I tried to give it a chance. I truly did keep hoping as I pushed through that it would somehow make sense or spark something inside me but in the end there was nothing.  Hopefully others have a better time of it than me.