REVIEW: Beyond Parallel by Matthew Turner 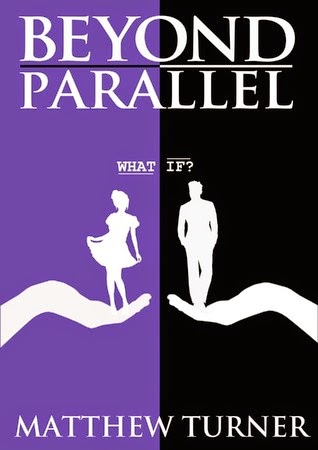 One boy. One girl. One insignificant moment that changes their lives forever.

Bella and Clark are two young twenty-somethings, finding themselves in a chaotic and crazy world. One craves love; the other avoids it. Will they find one another, or will a single what-if moment send them down different paths?

In the same mold as Sliding Doors, Uncertainty, and Smoking/No-Smoking, Beyond Parallel flips between two parallel tales. One follows Bella and Clark as a couple, the other as if they never meet.

Friendships, careers, dreams, fantasies...their lives are no different to yours or mine.

It's incredible how a small, everyday decision can affect how you look, where you live, the people you love, and who you become. We could all live a billion lives, but we’re only given one. Is it all a game of chance, or are Bella and Clark meant to be?

The thought of reading a story of parallel lives was very interesting to me. To see the effects of a possible chance meeting between two people and how it determines their lives from that point on. I was worried it could get a bit complicated and confusing but the worry was unwarranted. Matthew Turner lays it out for you very simply. The passages in which they've met start out having the title "With..." and so obviously when they haven't it's "Without..." Simple.

I'll probably touch on this subject a few times during this review because without it there's really nothing that can be done to change your mind one way or the other. Hope. In order for a romance to take hold of you and keep you endlessly turning the pages to reach those last few lines you must have hope. Hope that even in the darkest times of this love, that eventually it will get better. I was...without.

Part of the issue was the characters. Honestly I just didn't like them. And I tried. Believe me when I say I did. Because I wanted nothing more than to love this book. But both Clark and Bella were very weak and selfish people. Especially Bella. There's nothing wrong with weak. But they needed to grow, become more than what they were at the start. I just didn't see that until maybe towards the end? But even then they were questioning. Always questioning.

Everyone was just so...sad and depressing. On one side they were just settling and becoming miserable people. They'd settle for just enough to be, moderately satisfied. Stifling dreams and hopes and fears and inwardly letting it all eat away at them into this miserable existence. It's so sad to read. I was never fully given any hope for either of them. Once just the slightest bit was brought in it was quickly dashed away with the contrary internal conflicts. On the other side they poured themselves into their dreams. Which is fine. But at the cost of friends and family? At the cost of everything? I felt no happiness on either sides of the parallel. Just frustration and deep sadness.

Clark is supposed to be this guy who avoids love. And yet in both paths of his life you never really see that, whether it was with Bella or Beki he was into the relationship, even his friend Sam would remark about how different and changed he was. It wasn't until he makes a very important relationship decision when he's with Bella, that is HIS choice, no hinting from her not even a spark of inspiration to make this decision. Once he's done it, it's like he snaps and all of a sudden he questions everything he's doing and wants to bolt most of the time. It just didn't make sense to me. Had he shown signs of this from the beginning maybe it wouldn't have been such a big deal. But there was just too much contradiction within each path.

I liked one person from the start of the book, Alex, and by a little over the halfway mark the signs I saw coming from him had me lose faith completely. And I was right. It broke my heart. By that point I had given up entirely and was just drifting through. I felt nothing. Because I should have had hope. Even if it's just a sliver. I need to be able to feel like by the time I get to the end of this story something will make me say, "oh yes. This was worth it."

There was one bright gem. One part that had me absolutely laughing out loud. It was just so random and funny. All of a sudden in the middle of it all we have this brief passage, a conversation between Clark and his best friend Sam...about a whale...and swimming. I'm telling you it's random as all hell and killed me. I wanted more like that. I think had there been more glimpses of funny, no matter how brief, I'd be singing a different tune.

I give Matthew Turner credit for the fact that this whole idea was exciting and thought provoking. The whole "what if" thing. And the effort was made and attempted, the book really tried. It just wasn't enough for me.