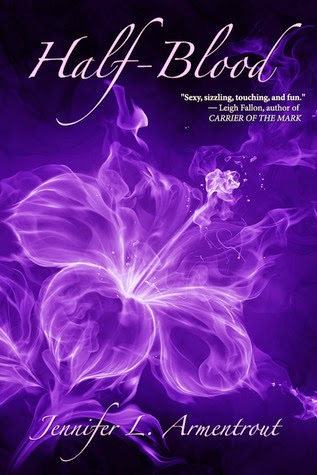 The Hematoi descend from the unions of gods and mortals, and the children of two Hematoi—pure-bloods—have godlike powers. Children of Hematoi and mortals—well, not so much. Half-bloods only have two options: become trained Sentinels who hunt and kill daimons or become servants in the homes of the pures.

Seventeen-year-old Alexandria would rather risk her life fighting than waste it scrubbing toilets, but she may end up slumming it anyway. There are several rules that students at the Covenant must follow. Alex has problems with them all, but especially rule #1:

Relationships between pures and halfs are forbidden.

Unfortunately, she’s crushing hard on the totally hot pure-blood Aiden. But falling for Aiden isn’t her biggest problem—staying alive long enough to graduate the Covenant and become a Sentinel is. If she fails in her duty, she faces a future worse than death or slavery: being turned into a daimon, and being hunted by Aiden. And that would kind of suck.

You think with as much as I love JLA that I would have started this series sooner. Covenant always seems to be everyone's favorite series. I guess I was putting if off because I know how impatient I am waiting for those next books to come out. So I've had Half-Blood, Pure and Deity sitting here on my desk (this was all before the release of Apollyon it'll be coming very soon!) and trust me I looked at them every day telling myself "You can wait. They'll all be out before you know it and you can wait!" Yeah. No.... With the release of Origin and Obsession just around the corner, I needed a JLA fix. So I opened Half-Blood. I was just going to read a chapter. You know just get a little taste and then I'd be okay. I'd finish the other stuff I should be doing instead. Just one chapter.

And then I met him. You know who I'm talking about. The one with the storm cloud eyes. He's quiet and fierce. Passionate and reserved. He's Aiden St. Delphi. I am seriously crushing hard on him. I don't know how Jennifer Armentrout always seems to write the most perfect guys but she just does. It's like a gift.

I am such a huge mythology fan. Back in my school years I would always grab mythology books and try to soak as much of it in as I could. Having to do any sort of assignment with a mythological theme would become a best school day ever! And some of my favorite shows back then were ones like Xena and Hercules. Wow..I just totally let my geek out of the closet there didn't I? Anyway. I had a feeling finding out this series was set in mythology that I was going to just love it. And so far we're off to a great start and I do.

Alex is awesome. She's one of my favorite kinds of heroines. She kicks ass when she has to. She doesn't take crap from anyone. And she's filled with so much passion and fire. And where I would have normally cracked under some of the stuff she goes through, it only fuels her even more. She's got tremendous strength. That's not to say she's a cold robot. She's vulnerable too. And even she can have a bad day and let her armor crack. She's got a realness to her.


The storyline is great so far. I'll admit part of it I saw coming. Though instead of being a "well that was totally predictable" sort of thing it was something I was hoping would happen. Sort of put some conflict and possible drama into the mix. (I love me some complications!)


And speaking of complications...I'm finding myself growing attached to one of them. Seth is really starting to grow on me. There's just something about him. He worries the hell out of me. He's got bad news written all over him. So I'm probably going to fall for him. It's a gift I have ha!

I am so loving this series so far. I'm still a huge Lux fangril by far (maybe it's because it was my first I don't know...) but Covenant has the potential to share that spot in my heart for fave series. And needless to say, one chapter turned into the entire book. And now my dilemma is moving on to Pure right away? Or finishing the other stuff I should be working on?...