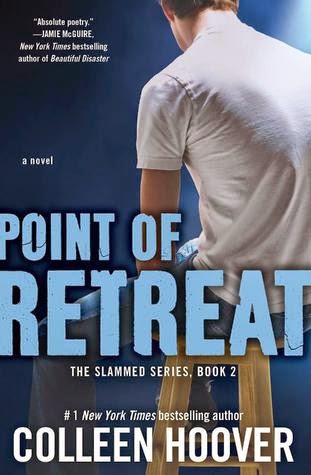 
In the second book in the Slammed series by New York Times bestselling author Colleen Hoover, Layken and Will's relationship has endured through hardships, heartache, and a cruel twist of fate, further solidifying the fact that they belong together. But the two lovers could not have expected that the things that brought them together may ultimately be the things that tear them apart. Their connection is on the brink of being destroyed forever and it will take an extraordinary amount of willpower to keep their love afloat.

Layken is left questioning the very foundation on which her relationship with Will was built. Will is left questioning how he can prove his love for a girl who can't seem to stop "carving pumpkins." Upon finding the answers that may bring peace back into their relationship, the couple comes across an even greater challenge—one that could change not only their lives but the lives of everyone who depend on them.

Things I've learned from reading this book, well Slammed as well so I guess you can say the whole series:

1. Suck and Sweet is probably the best daily family event/game ever and I think everyone should do it. (We'll see if my 15yr old agrees...lol)

2. Butterfly and all it's many possible forms is the absolute best curse word on the planet. And it sounds pretty saying it.

3. No matter how prepared you think you may be for anything, sometimes life will slap you in the face and show you how very much you really aren't. So prepare for the unthinkable.

4. Family isn't defined by your mom, dad, brother, sister, etc. Family isn't always blood. Sometimes family can be your friends, your neighbors. Blood doesn't define family. (It was worth repeating.)

5. Always. ALWAYS. Seriously always, tell the person you love what's going on in your head. Don't hide things. Even harmless things. Even if you're afraid they'll jump to conclusions now or be hurt now. It's easier to fix it in the now than them finding out down the road and trying to explain why you didn't tell them then. (Always been my philosophy.)

That's all. There's more. But these were my favorites. The serious and the funny.


I really don't know what I was thinking. Maybe that since Slammed ended on such a good high that possibly we could have an entire book two filled with nothing but rainbows, sunshine, puppy dogs and cupcakes. Was that too much to ask? Yes. I was entirely unprepared for this book. I wish I could lay blame to a "rookie mistake" But I can't. I should of known better by now.

Emotional Roller Coaster. It should be a new genre. And Colleen Hoover would be it's reigning queen! This one was entirely in Will's POV. It was butterflying fantastic. I loved being inside his head, so to speak. So much happens, I mean after everything we go through (yes we!) with Slammed you can't help but hope for a tiny break. And we get it... in the beginning. Then we get knocked to the floor and picked back up and knocked to the floor and picked back up. Up and down. I think I'm emotionally spent.

I wanted to quit a couple times.  Like when the first shoe dropped. And I saw it coming, I just knew before--but that's all I can say, really, without spoilers. And then next thing I know, I'm crying again. But the good cry. The beyond good type of cry and smiling and just happy. And it's only like 60-ish%, so I'm cautious and waiting for the other shoe to drop. And then it's the end of Part One. And there's two words that end it. And if you've read this then I'm sure you know what I mean. I cried. I turned off my Kindle. I just didn't want to know what those two words would turn into. I couldn't move on to Part Two. Not yet. I almost quit again! It was getting to be too much.

It took me about an hour to be able to pick it up again. Honestly I couldn't not know.  And I think from that point on is where I was really touched by the definition of their family. Lake, Will, Kel, Caulder, Eddie, Gavin, Kiersten and Sherry. I mean they have other people in their lives but when push comes to shove those people would all do just about anything for each other. And it was awesome. I was a bit suspicious at first with the addition of Kiersten and Sherry but by the end I don't think anything would have been the same without them. Especially Kiersten who taught me my last thing. Sometimes it feels good to stand up for yourself and just say "Butterfly you".