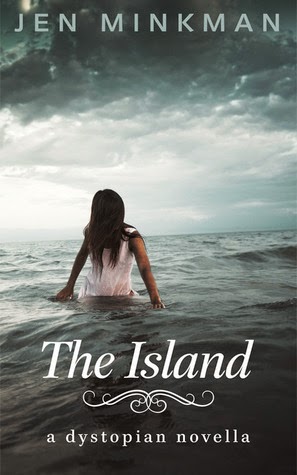 
‘I walk toward the sea. The endless surface of the water extends to the horizon, whichever way I look.

Our world is small. We are on our own, and we only have ourselves to depend on. We rely on the Force deep within us, as taught to us by our forefathers.

If I were to walk westward from here, I would come across a barrier – the Wall.

Behind it, there are Fools. At least, that’s what everyone says.

I have never seen one.’

Leia lives on the Island, a world in which children leave their parents to take care of themselves when they are ten years old. Across this Island runs a wall that no one has ever crossed. The Fools living behind it are not amenable to reason – they believe in illusions. That’s what The Book says, the only thing left to the Eastern Islanders by their ancestors.

But when a strange man washes ashore and Leia meets a Fool face to face, her life will never be the same. Is what she and her friends believe about the Island really true?

Or is everyone in their world, in fact, a Fool?

This is hard. The idea and that blurb were great. I was excited, yet a bit worried as it's only 80 pages and I was afraid it wouldn't be enough or be too rushed to get everything in. Needless to say those should have been the least of my worries. Look I'm not saying this book is terrible. Because for what it truly is, it's okay and there's a particular group of people who will probably go crazy over it. I'm just not one of them.


Let me explain. When I first started a few things clicked for me and I felt like maybe I was reading some sort of Star Wars Fan Fiction, I know that's not the right word for what this is but it was just first instinct. Let me give you an example. Our main character's name is...Leia and she has a twin brother named, yep you got it Luc (Luke). But it's not just the two of them there are quite a few other main players who had names that were just a one off from a Star Wars character. Such as Leia's best friend (J)Abba who happens to be dating (L)Ando and then there's the "Leader" of them who is Sol(o) and his brother Ben. I mean you see where I'm coming from with my suspicions right?


But not only that, Leia kept talking about the Force. Yes, The Force. And how they were supposed to be feeling it from within and so on and so forth. That pretty much clinched my conclusion. Until somewhere around 25-30% in "The Book" that's mentioned in the blurb up there, well Leia sneaks in to look at it and on the cover are their ancestors, the first people on the island...Luke Skywalker...Han Solo...Leia...*Sigh* Honestly I'm more disappointed in myself for not picking up on it now that I reread the blurb and see both Leia and the word Force jump out at me but my brain didn't connect the two until all those other names started popping up.


I am the biggest Distoypia addict. I will get books based on that fact alone. They excite me and thrill me to no end. But with this, I felt sort of cheated. If I wanted to read about Star Wars characters it would be one thing. But that's just not the sort of thing that I'm into. Love the movies, would like to keep them just as that. Movies. And like I said I promise this book isn't horrible. Take out the Star Wars references and the other stuff was really good and could have been so much better. I think really hard core Star Wars people will probably enjoy this quite a bit. Sadly it's just not something I was into.

I'd still like to thank Patchwork Press for the opportunity to read and review this book! :)