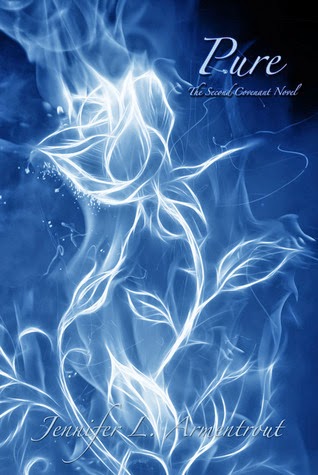 There is need. And then there is Fate...

Being destined to become some kind of supernatural electrical outlet isn't exactly awesome--especially when Alexandria's "other half" is everywhere she goes. Seth's in her training room, outside her classes, and keeps showing up in her bedroom--so not cool. Their connection does have some benefits, like staving off her nightmares of the tragic showdown with her mother, but it has no effect on what Alex feels for the forbidden, pure-blooded Aiden. Or what he will do--and sacrifice--for her.

When daimons infiltrate the Covenants and attack students, the gods send furies--lesser gods determined to eradicate any threat to the Covenants and to the gods, and that includes the Apollyon... and Alex. And if that and hordes of aether-sucking monsters didn't blow bad enough, a mysterious threat seems willing to do anything to neutralize Seth, even if that means forcing Alex into servitude... or killing her.

When the gods are involved, some decisions can never, ever be undone.

Pure had me seeing, so much more than Half-Blood did, why people always seem to say that this is their favorite series when you mention Jennifer L Armentrout. She's starting to make a habit of pulling me in with book one in a series. Only to kick it up a notch and keep setting the bar just a little bit higher with each book that comes along. I can't wait to see what's in store with me for Deity, Apollyon and Sentinel. *Excitedly bounces in chair* I gotta stop that, it makes it hard to type!

This book was absolutely laugh out loud funny through quite a bit of it. I love Alex and her snarky-say-what's-on-her-mind-no-matter-what ways. Some of her thoughts and the lines that came out of her mouth had me laughing so hard I was afraid I'd wake someone during my late night reading binges. One of my favorites was this moment with Seth:

Seth sighed again, this time much louder than before. Quietly and
rather casually, he reached over and tugged me across the couch.
I ended up with the side of my face smooshed against his thigh and
his heavy arm draped over my side. "What are you--?"

I tried to sit up, but didn't make it very far. His arm weighed a ton.
Several unsuccessful attempts later, I gave up. "So...uh, you're a
Team Edward kind of guy?"

He snorted. "No. I'm Team James or Team Tyler's Van, but apparently
neither of them won by the look of it. She's still alive."

I mean come on, I'm a HUGE Twilight fan (Yeah suck it people I'm a fan and I'm proud! lol) but even I have to admit, that's pretty damn funny! And there was so many more moments that were equally as awesome. And they were needed. Because it wasn't all fun and games. There was quite a bit of heartache too. Oh yeah I had to reach for the tissues on this book.

If Half-Blood had me swooning over Aiden through the whole book, it completely flip-flopped on me in Pure. I wanted to stab him. Repeatedly. I had urges to roll my eyes and close the book every time I saw his name appear. I know not everyone has read this so I can't even really hint at to my reasons why but ugh! Literally until the last TWO PAGES, T-W-O, I just couldn't stand him. I'm still not liking him a whole lot but right at the end there he really stepped up to the plate and did something that made me remember why I liked him so much in book one.

Seth on the other hand, okay you guys are going to think I'm crazy I realize this, but I love him. I am so Team Seth at this point. (I did say at this point I still have more books to read things may change lol) I KNOW, I know he is arrogant, and full of himself, and cocky, and loves to talk about himself and how awesome he is but....come on the guy is pretty freaking awesome! And the sides of him that aren't all of those things, that come out in tiny waves, for Alex? Yeah those made me fall for him. What can I say the jerk-face makes me laugh!

And there's sort of a new mystery person. Brown Eyes. From the moment that servant first made an appearance, I have this feeling, it was instant, I'm 99.9999999% sure that I know who he's going to turn out to be. And if it's true...oh holy juicy hell...it's gonna be good!! So I'm just throwing it out there now, so when we do find out what's up with him I can either do the "I was right! I was right!" dance or the head hanging of shame. Come onnnn dance!

So overall this one was so much better than the first one. More laughter, drama, action, mystery, betrayals, sadness. More everything! Jennifer L Armentrout at her finest!