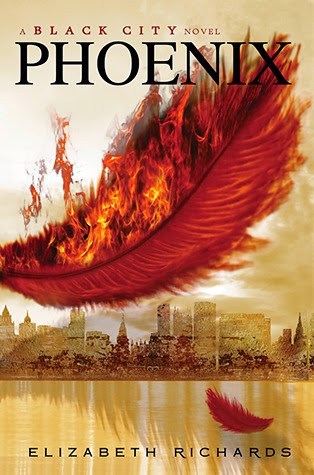 Weeks after his crucifixion and rebirth as Phoenix, Ash Fisher believes his troubles are far behind him. He and Natalie are engaged and life seems good. But his happiness is short-lived when he receives a threatening visit from Purian Rose, who gives Ash an ultimatum: vote in favor of Rose’s Law permanently relegating Darklings to the wrong side of the wall or Natalie will be killed.

The decision seems obvious to Ash; he must save Natalie. But when Ash learns about The Tenth, a new and deadly concentration camp where the Darklings would be sent, the choice doesn’t seem so simple. Unable to ignore his conscience, Ash votes against Rose’s Law, signing Natalie’s death warrant and putting a troubled nation back into the throes of bloody battle.

I'm so excited about winning this off of Goodreads. (Big, big thanks to Penguin for doing it! I heart you guys mucho ♥!)  I've entered giveaways on there so many times before but this was my very first win. Could it have been any better than this? Nope! The Book Gods were truly smiling down on me that day. (I'm such a dork haha)


I will start off by admitting that, yes. This book frustrated me beyond all reason. I was angry and upset and characters were just pissing me off. Had I been able to reach inside the book there probably would be no need for a book 3 because most of them would be dead right now! And yet I sit here completely hooked. I mean I devoured these books. I started Black City on the evening of May 28th and here I am in the wee early hours of the 31st done with Phoenix, going a bit crazy over the fact that I have to wait until sometime in 2014 for book 3!!! Ugh. Sigh.


Most of my frustration fell within the love story. It started out nearly perfect. I was swooning over the engagement and things were so good. (Not a spoiler it's in the blurb!) Of course it was only about 50 pages in so you know something was going to shatter it all to pieces. And it did. A lot. My heart broke so many times through this book. It seemed every time I turned a page some force was pulling or attempting to pull Natalie and Ash apart. It wasn't just people either. A huge twist has me so torn up and worried, still. Sometimes it was just so hard to read.


Phoenix has quite a bit more action because we're thrust into the rebellion for the majority of this book.  Which was intense and exiting. Then there's the other side of it, the loss and sadness, and quite a bit of betrayal. Some of it from people I grew really attached too and I didn't see it coming. I was pretty angry and felt pretty betrayed myself! But a good part of all of that was that we get to see more of the United Sentry States. There was quite a bit of travelling and we got to learn more about their world. And meet new characters along the way. Some good. Some bad. And some...a little bit of both.


I'm emotionally spent after reading this and I have become thoroughly captivated by this world and these characters. Phoenix definitely kicked it up a notch from Black City and I cannot wait to see what book 3 has in store for me. I'm still siting here trying to process the 2nd twist that was thrown in there at the end. Is it 2014 yet? Yeah...thought not... :(