ARC REVIEW: In Too Deep by Coert Voorhees 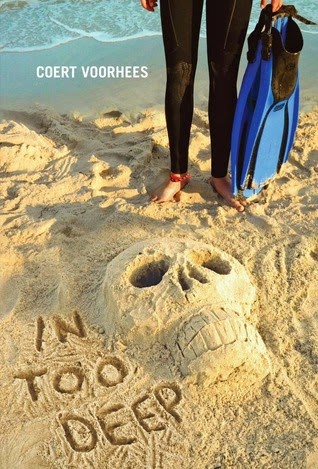 
Annie Fleet, master scuba diver and history buff, knows she can’t fight her nerd status as a freshman at her Los Angeles private school. And she doesn’t care—except for the fact that her crush, Josh, thinks she’s more adorable than desirable. Annie is determined to set him straight on their school trip to Mexico. But her teacher has other plans: he needs Annie to help him find Cortez’s lost-long treasure.

Suddenly, Annie finds herself scuba diving in pitch-black waters, jetting to Hawaii with Josh, and hunting for the priceless Golden Jaguar. But Annie and Josh aren’t the only ones lured by the possibility of finding the greatest treasure ever lost at sea. Someone else wants the gold—and needs Annie dead. In deeper danger than she ever imagined, can Annie get the boy and find the Jaguar, or is she in over her head?

Critically-acclaimed author Coert Voorhees delivers breathtaking romance and non-stop action in his newest novel, the spirited and captivating In Too Deep.

I wasn't expecting to enjoy this book as much as I did. Sure enough, I picked it up and hardly put it down until I was finished (basically one day lol). It was such a quick read and easy read filled with action, danger, a bit of romance and of course treasure hunting! That's what made pulled me in initially. I was hoping it would be exciting and fun. I wasn't disappointed.

There was so much funny in this book, which did surprise me. I really enjoyed all of the characters, especially Annie's friends Gracia and Mimi. When the two of them would start in on her I would constantly find myself laughing out loud. The relationship between Annie and Josh was sweet and frustrating. Frustrating in that misinterpreted signals kind of way where you just want to say "kiss each other already!!" But it was cute.

The treasure hunting adventures were both exciting and dangerous and had me wanting to bite my nails at times. I mean it was fun when they were doing all the research and the excitement sort of builds up in you as well with new discoveries or evidence. Then on the flip side there are other bad people who are also wanting to get their hands on the treasure. It was hard to know who to trust at times. So the danger and adrenaline kick in a few times. It was great!

So I do have one pretty big complaint. While I did enjoy this book and the adventure that it brought me on, everything just always seemed to fall in to place too conveniently. I mean they're teenagers. Still in high school. And I realize they're in a fancy private school for celebrities and children of celebrities but it was still just too easy for one of the girls to plop down a credit card (limitless black one no less...) and buy $50 grand worth of diving equipment. It was a bit ridiculous and frustrating. Whisking away in private jets. It took a bit of the fun out of it. I mean in all honesty had they not been teenagers I mean I could have seen one of them having the bank account to fund all of this and do the whisking. But the fact was they were kids so it just didn't sit well with me. That's just my opinion though. Still in the end I did enjoy the book very much and I want to thank Disney Hyperion for giving me the chance to read and give an honest review for this book! :)