My next few WoWs will most likely be featuring more than one book. I normally tend to focus on just one but...I was going through my "to read" shelf on Goodreads and just kept pulling stuff up so I'm grouping them all up and adding them to a WoW before they're released! (What can I say the book I'm trying to get through at this moment is....well let's just say going through 37 pages worth of a Goodreads shelf was way more fun! :(  *Cough Cough Cough* ...anyway :P)

Here's a few soon to be released books I'm looking forward to! 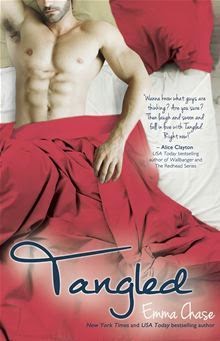 Drew Evans is a winner. Handsome and arrogant, he makes multimillion dollar business deals and seduces New York’s most beautiful women with just a smile. He has loyal friends and an indulgent family. So why has he been shuttered in his apartment for seven days, miserable and depressed?


He’ll tell you he has the flu.

I pre-wrote this blog and I realize after it's posted that I'm a day late on the "waiting" part for Tangled since it's already released...but I'm lazy and I put in the work so it's staying :P LOL

The Sassy Belles by Beth Albright
Expected publication: May 28th 2013
by Harlequin MIRA

Meet the Sassy Belles. They're strong as a mint julep, sweet as peach cobbler, and no matter what, they stick together.


There are only two seasons in Tuscaloosa—football and waiting-for-football. When Lewis Heart, football announcer and voice of the Crimson Tide, vanishes after an impromptu romp with Vivi Ann McFadden at the Fountain Mist Motel, Vivi does what any Southern woman would do: call her best friend, Blake O'Hara Heart, attorney-at-law.

With the town gossip swirling around them, Vivi and Blake are determined to find out what happened to Lewis and clear Vivi's reputation. Because after all, men may come and go, but the Sassy Belles are forever.

Not since Steel Magnolias have we fallen in love with such sexy, strong and hilarious Southern women. So grab your best girlfriends and join these Belles on the first of many joyrides through the Deep South…. Noelle Buckman is looking forward to making a fresh start in college, one that doesn’t involve immature high school boys. The second she steps on campus for freshman orientation, she can sense the possibilities. Especially when she spots Andy, a resident advisor who’s not just hot but also thoughtful enough to open doors for a girl.

And Andy has his eye on Noelle. Even when her nerves take control and she thinks she comes off as a hillbilly with no direction, Andy can see what she’s really like and he’s more than a little interested.

But orientation is less than two full days and there’s an entire summer between Noelle and Andy. Will her attempt to romance the R.A. be as short-lived as college orientation?

Can Tessa pose as Madison . . . and stop a killer before it’s too late?

Tessa is a Variant, able to absorb the DNA of anyone she touches and mimic their appearance. Shunned by her family, she’s spent the last two years training with the Forces with Extraordinary Abilities, a secret branch of the FBI. When a serial killer rocks a small town in Oregon, Tessa is given a mission: she must impersonate Madison, a local teen, to find the killer before he strikes again.

Tessa hates everything about being an impostor—the stress, the danger, the deceit—but loves playing the role of a normal girl. As Madison, she finds friends, romance, and the kind of loving family she’d do anything to keep. Amid action, suspense, and a ticking clock, this super-human comes to a very human conclusion: even a girl who can look like anyone struggles the most with being herself.

These 4 look like they're going to be a lot of fun to read! And they're only about a week away yay! So what are you excited for this week? :)