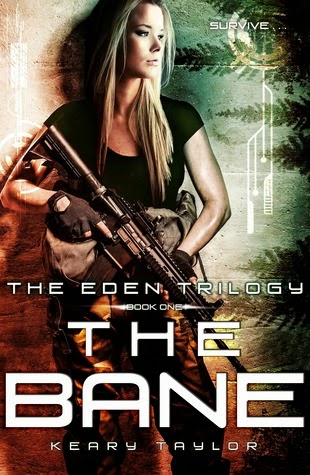 
Before the Evolution there was TorBane: technology that infused human DNA with cybernetic matter. It had the ability to grow new organs and limbs, to heal the world. Until it evolved out of control and spread like the common cold. The machine took over, the soul vanished, and the Bane were born. The Bane won't stop until every last person has been infected. With less than two percent of the human population left, mankind is on the brink of extinction.

Eve knows the stories of the Evolution, the time before she wandered into the colony of Eden, unable to recall anything but her name. But she doesn't need memories to know this world is her reality. This is a world that is quickly losing its humanity, one Bane at a time.


Fighting to keep one of the last remaining human colonies alive, Eve finds herself torn between her dedication to the colony, and the discovery of love. There is Avian and West – one a soldier, one a keeper of secrets. And in the end, Eve will make a choice that will change the future of mankind.

The Bane is The Terminator meets The Walking Dead with a heart-twisting romance.

Previously published as Eden, due to reader demand it has been revamped and rereleased as The Bane: book one in The Eden Trilogy.

The description "The Bane is The Terminator meets The Walking Dead with a heart-twisting romance" could not be more accurate. Though not so much a fan of The Terminator myself, I found I was completely caught up in the world of Eden. I started reading, feeling like only 5 minutes had past and find I was at 25%, then 60%, then 80% and next thing I knew I was done. There was no hesitation in picking this up, already being a fan of Keary Taylor's work. I knew she could write Contemporary, having read and loved "What I Didn't Say" and I knew she could write Paranormal having also read and loved "Branded (Fall of the Angels #1)". It left no doubt in my mind that when it came to my "go to" genre, Dystopia, that I wouldn't be disappointed, and I wasn't!


The post-apocalyptic world that Keary Taylor presents us with is both amazing and pretty scary. It's 5 years after the TorBane virus took out basically the entire population. Those who aren't infected, the "survivors",  take to the countryside, far off from the cities that The Bane are so attracted to. Houses, electricity, plumbing all the things that we take for granted daily are things of the past. Cities are avoided because a single touch from a Bane spreads the infection and you're turned into a half human half machine type of thing with inhuman speed, strength and so on that craves spreading the virus.


Stepping into Eve's world was so interesting. She doesn't remember anything of her existence before the Evolution. Just her name. She knows nothing of the way things used to be before being found and brought to Eden, the community of about 30+ survivors. She's tough and all she knows is survival. She's doesn't feel emotions like the rest of us and in many ways she's very childlike. Things that are so natural and common sense for us she doesn't know what they are or understand the meanings. Like the first time she hears the word restroom she whispers to a friend to ask what it means and even after it's explained she's even more confused as to why it's called a restroom. She's so endearing.

The arrival of West to their family like community stirs things up within Eve. She starts to feel things for the first time and discovers that he may have the answers to the questions of her past. He lets his feelings show for her, but he also hides things, keeps secrets and she struggles to trust him even though he makes her feel alive. Then there's Avian who also makes her feel things once her emotions are awakened. Avian has been there for her from the beginning. He's sweet and caring and takes on a lot of responsibility for Eden as a doctor of sorts. She feels things for both but finds it hard to make the distinction between her feelings for the two and what love really is. With everyone's feelings out and obvious they both let her know she had to decide because she couldn't have both. I can tell you I wavered back and forth between the two all the way up to the end. My heart feels like she made the right choice and swooned like crazy.


But the love story is just a portion of what makes this book amazing. It's fast-paced action and had me on the edge of my seat. Every free moment I had I used to absolutely devour this book. The action was intense and really got my heart pounding. The increasing boldness and aggression of the Bane begin to cause survival issues with the people of Eden who are forced to make tough choices.


Everything seems to wrap up quite nicely by the end. You could almost stop right there and be satisfied. There are still lingering questions and things left open for the next book. But you aren't left dangling with a major cliffhanger. I thoroughly enjoyed this book and I'm really excited to move on to The Human and see what's in store for everyone.