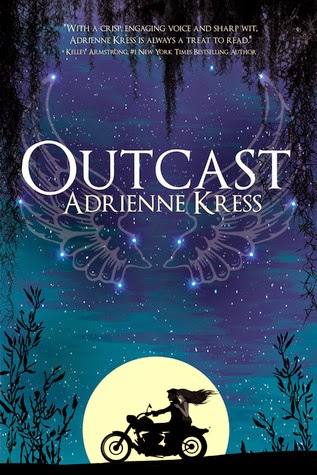 After six years of “angels” coming out of the sky and taking people from her town, 16-year-old Riley Carver has just about had it living with the constant fear. When one decides to terrorize her in her own backyard, it’s the final straw. She takes her mother’s shotgun and shoots the thing. So it’s dead. Or … not? In place of the creature she shot, is a guy. A really hot guy. A really hot alive and breathing guy. Oh, and he’s totally naked.

Not sure what to do, she drags his unconscious body to the tool shed and ties him up. After all, he’s an angel and they have tricks. When he regains consciousness she’s all set to interrogate him about why the angels come to her town, and how to get back her best friend (and almost boyfriend) Chris, who was taken the year before. But it turns out the naked guy in her shed is just as confused about everything as she is.

Set in the deep south, OUTCAST is a story of love, trust, and coming of age. It’s also a story about the supernatural, a girl with a strange sense of humor who’s got wicked aim, a greaser from the 50’s, and an army of misfits coming together for one purpose: To kick some serious angel ass.

It's difficult to come up with something to say here. While overall I enjoyed the story. Enough. It was insanely confusing at times. Parts of it I still don't think I got. So this will probably be shorter than normal.


Character was a big issue with me I think. I did enjoy Gabe quite a lot. He was unique and funny, little bit cocky but not over the top and had that vintage feel. Obviously, He's from the 50s. But he was very fun to read. Sadly I couldn't say the same about Riley. And she's supposed to be our main character. But I found it hard to understand where she was coming from most times. She was too much in her own head and the narration became rambling at times. And she whined. A lot. She had no backbone until the end. It got tiring.


Because of all of that the story felt very slow to me. I was just interested enough that I wanted to know how it ended (don't even get me started on that!) but the way it drug on with Riley and her constant "I can't do this. I'm not that kind of person. Blah, blah, blah" just became a major frustration and it took me longer to get through this book than normal. Plus it took away a bit of the enjoyment factor.


There were so many great opportunities for this book. I mean hello, tying up a naked guy in your shed and holding him hostage. It's funny! It's intriguing! There was a crazy-ish Pastor who was more of a cult leader. I was just waiting for them all to kick back and shave their heads and drink the Kool Aid. And the whole concept behind the angles was different from the kinds of angel stories I've read before. It was all good in theory. It's just that some of the characters got in the way of the story. For me that is. It was an interesting enough read which is why I put it at a 3 instead of say 2.5 or lower. It just could have gone a whole lot better.

Thanks to Diversion Books and NetGalley for to opportunity to read this book! :)