REVIEW: The Human (The Eden Trilogy #2) by Keary Taylor 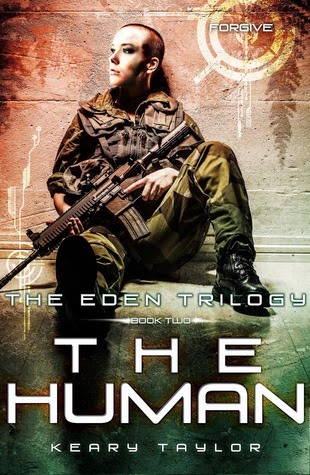 
The city of New Eden is cleared, but it won’t stay that way forever. The Bane continue to advance in horrific ways that will wipe humanity from the face of the Earth. A storm is coming, one none of them could have dared imagine.

When a group of outsiders come to the city, everyone is on edge. They have too many questions and not enough answers about where they are from or what they want. Just because they are human doesn’t mean they can be trusted.


Eve made a choice–one that could have deadly repercussions. Desperate hearts bring about desperate actions. Now she must make another decision as her world continues to crumble: come to terms with who she really is, or risk her sanity. She thought she had unlocked all the secrets from her past, but there are truths still buried that leave her questioning what is real and what is not.

Since this is book 2 in the series there may be spoilers for book 1 so if you haven't read it please turn away now. I can't guarantee I won't reference something from the previous book, even though it may be small I hate doing that to people so you've been warned...


I received an eBook copy of this book from Keary Taylor in exchange for an honest review. It's been a few days since I finished The Human and I'm still trying to recover. There is no grey area for me when it comes to Dystopia. I either abso-freaking-lutely love it or I don't care for it at all. The Eden trilogy would fall under the former category. I fell in love with The Bane instantly and couldn't wait to move on to The Human. Of course there's always a bit of worry moving on from the first book in a series no matter who the author is. Especially when it ended on such a high for me. Can it live up to it's predecessor? My answer is unequivocally yes and then some.


The Human picks up a few months after The Bane ends. Life's a bit different from how it was in the first book and everyone is trying to figure out how to adjust. Especially Eve. She's going through a major struggle. Going through adjustments to lessen her emotional blockers and become more..."human" get to be overwhelming. Having no previous memories of life before the Evolution, living in the city isn't something she's cut out for and she feels imprisoned in a way, but she won't abandon those she views as her family. West's situation has become a drain on her mentally. She feels herself slowly starting to crack.


While the first book was more about the world building, I found this one to be much more intense and action packed. Especially after the arrival of a group of armed strangers shows up at New Eden and turns their lives upside down. In a world with so very few humans left, the Bane don't seem to be the only threat to survival. We also find out some new and interesting twists about Eve and her past. Just when she thinks she has herself figured out, she gets blindsided by new information.


There is unforgivable betrayal, in my opinion, and from someone I cared a great deal about from the series start. It brought forth a lot of frustration and anger. More secrets, more danger, more action. It was a heart pounding, perfect second installment to the Eden trilogy. And the ending...are you kidding me? I think my jaw hit the floor. It doesn't so much as leave you hanging as it leaves you absolutely dying to get your hands on The Eve. It definitely set the scene for what's sure to be an explosive finale. I. Can't. Freaking. Wait.