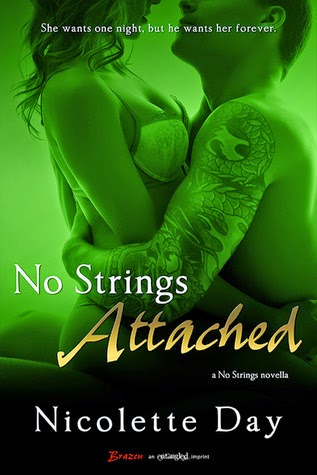 
She wants one night.

He wants her forever.


Hayden Summers just landed the job of a lifetime taking pictures for Time magazine, but she’s determined to leave with no regrets. The first thing on her list? Erase the memory of her cheating ex with a wild night of anonymous sex. The second? Figure out why her best friend, sexy bar owner Jace Jennings, stopped speaking to her the night she told him about the job.


Jace has a problem. Hayden isn’t just leaving the country, she’s risking her life—just when he’s realized he’s in love with her. When fate traps them in the storage room of his bar together, barely contained desire simmers to surface. In one last attempt to keep her, Jace offers Hayden the one thing she wants: a night of hot sex, no strings attached.

But when the night is over, will Jace be able to let her go?

And will Hayden leave with her heart intact?

After I finished this the only thought I had or could even come up with was something like.."What the hell did I just read?" And can I just say, that I mean that in the best way possible? Because holy crap, that may have only been 67 pages, but it was 67 delicious pages. My only complaint? I wanted it to go on and on and on and on. Couldn't they have maybe been locked in the storage room for like a week? Maybe two? Yeah I know. Blah, blah they would've died, blah, blah. You people ruin all my fun with your "reality checks"!


This book followed one of my absolute favorite types of storylines. The going from friends/best friends to falling in love. And in just a few pages Nicolette did a really good job at showing us the emotional depth between Hayden and Jace without having it feel like it's just another been there done that friends to lovers sort of book. It was fresh and fun and a bit thrilling! You know, the idea of being locked in a room with a smokin' hot guy that you've been pining for since as long as you can remember. Tell me the idea of that isn't thrilling. Yep. Thought so ;)


I enjoyed all of the characters, even the side ones. Jace was beyond crush worthy. I really felt for him and enjoyed the book most when it was in his POV. And the little bits we got with Nate had me really liking him as well and I'm hoping we'll get to see his story in the future. I was pretty impressed that in such a short book I was given just enough to become attached to each one of these characters and have me wanting to read more of them.


This would be a perfect read for those of you who want something hot and endearing and just plain yummy, but don't have the time to sit down to a full length novel. I highly recommend it!

Be sure to look out for a guest post from Nicolette Day here on June 24th when I take part of a No Strings Attached blog tour!! :)
Posted by Unknown at 12:00 AM