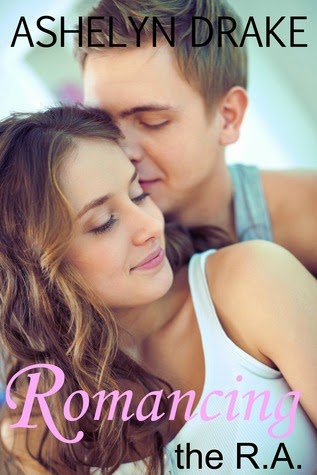 
Noelle Buckman is looking forward to making a fresh start in college, one that doesn’t involve immature high school boys. The second she steps on campus for freshman orientation, she can sense the possibilities. Especially when she spots Andy, a resident adviser who’s not just hot but also thoughtful enough to open doors for a girl. And Andy has his eye on Noelle. Even when her nerves take control and she thinks she comes off as a hillbilly with no direction, Andy can see what she’s really like and he’s more than a little interested.But orientation is less than two full days and there’s an entire summer between Noelle and Andy. Will her attempt to romance the R.A. be as short-lived as college orientation?

This was another one of our Girls with Books weekend read-alongs with Jessica from Lovin' Los Libros, Danielle from What Danielle Did Next, Wendy from Book Scents, Tonya from lilybloombooks, Trish from Between the Lines, Chelsea from Starbucks & Books Obsession and CeCe from CeCe's Steaming Mug of Books. I'd been looking forward to this one for a while. Unfortunately I didn't look close enough before getting into this book and after about 10-15 min of reading I look down and notice I was already at 10% which was confusing me because that's pretty darn quick. So I thought maybe I was reading longer than I thought and looked it up only to find out... it's 81 pages long. Sigh.

81 pages just isn't enough time to build a believable romance between 2 strangers. It was cute at the start and had me smiling and all that. But after a couple hours and she's wondering if he hits on all freshmen like this or if she's "special" and then I see things like "I'm not that type of guy" and "I believe you" it's like really.....?  Really? You've been acquainted all of 3 or 4 hours and you can take his word so easily? Not to mention spend the night with him? Wasn't impressed with that.

As a full length novel this book has so much more potential and I probably would be raving about it right now because like I said it started off cute and had me all excited. The characters were easy to like and had the romance been strung out for more than a 24 hour period the storyline would have been great too.

The only other thing I had a problem with was the bathroom cat fight. It just felt awkward and out of place. Thrown in just for tension sake. Things were short enough without having a potential roadblock that..turned out to be nothing. Another "it's not like that" and "I believe you" type of thing.

Overall I didn't hate it. I didn't love it. It just was.