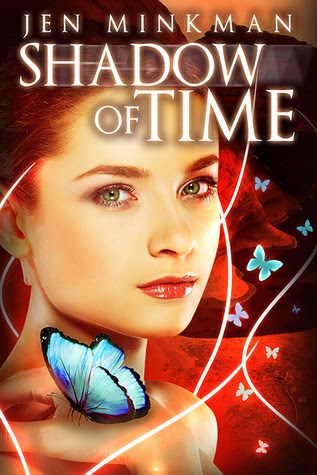 
All Hannah needs is a nice and quiet vacation after her first year of teaching French at a high school. She joins her brother Ben for the summer in their mom’s log cabin in Arizona. There, she meets Josh again, Ben’s childhood friend from the Navajo reservation. The little boy from the rez has grown up fast, and Hannah can’t help but feeling more for him than just friendship.

But fate apparently has something else in store for her. And it’s not peace and quiet. Night after night, Hannah is plagued by strange nightmares about the past of Navajo Nation and terrifying shadows chasing her. They seem to come closer – and why is Josh always present in her dreams?

Sometimes, the past has a way of catching up with you.

I received this book from Jen Minkman in exchange for an honest review. It feels good to say this for a change but there was so much good in this book I'm not even sure where to begin. Starting with one of the biggest parts of this book, the Native American aspect. It was brilliant and you could really tell  Jen did her research. And the way she wrote the book it was like teaching you things about the Navajo and their culture in a way that didn't feel like you were being taught. If that makes sense? It was just woven into the story. It completely fascinated me, the Native American culture on a whole always has.


This was another one of those books for me that secondary characters really make or break books and also another case of them making it. I loved pretty much every character that made it's way onto the pages. I mean don't get me wrong Hannah and Josh by themselves were pretty amazing but the people around them made them even better. I loved the closeness and the bond between Hannah and her brother Ben. They really cared for each other and it was sweet to read. Even better was the way that the circle of people bonded together and became something more than just friends. Even three people who they meet at the beginning of the summer. The way they all took each other in and watched out for one another. It makes you long to have a tight knit group like that.


Can we talk sexual tension for a moment? Because holy crap, the build up with the sexual tension between Hannah and Josh was insane. Every time I thought something was finally going to happen something would come along and interrupt it. Either another person or misunderstood signals would stop them or one of them snapping back to reality and holding back. I wanted to scream! (All in a good way I swear) So finally, when it happened I was cheering like crazy. Actually one line from one of her friends when she was telling her about it the next day totally summed up what I was thinking:

"Oh my God! Finally! That's awesome, I'm so excited for you!"

I totally fell in love with Josh and Hannah's romance. My heart fluttered every time hers did, it broke and I felt the emptiness when things were bad. I was 100% emotionally invested in the two of them. And it was an awesome and emotional ride that I loved every second of.


If the love story part doesn't have you hooked then the rest of the storyline will. The revelation of the nightmares and the part they played in the story was just brilliant. I couldn't even begin to guess what was going on there. Any suspicions I had were completely wrong and until the story came out I had no clue. It was such a fun and exciting adventure. If any of this sparks a bit of interest I highly recommend it.

Thank you again Jen for sending me this book and I can't wait to read more!! :)