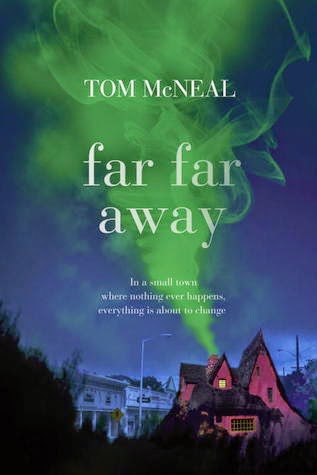 
It says quite a lot about Jeremy Johnson Johnson that the strangest thing about him isn't even the fact his mother and father both had the same last name. Jeremy once admitted he's able to hear voices, and the townspeople of Never Better have treated him like an outsider since. After his mother left, his father became a recluse, and it's been up to Jeremy to support the family. But it hasn't been up to Jeremy alone. The truth is, Jeremy can hear voices. Or, specifically, one voice: the voice of the ghost of Jacob Grimm, one half of the infamous writing duo, The Brothers Grimm.

Jacob watches over Jeremy, protecting him from an unknown dark evil whispered about in the space between this world and the next. But when the provocative local girl Ginger Boultinghouse takes an interest in Jeremy (and his unique abilities), a grim chain of events is put into motion. And as anyone familiar with the Grimm Brothers know, not all fairy tales have happy endings. . .

Young adult veteran Tom McNeal (one half of the writing duo known as Laura & Tom McNeal) has crafted a novel at once warmhearted, compulsively readable, and altogether thrilling--and McNeal fans of their tautly told stories will not be disappointed.

I received an eBook copy of this book from NetGalley and Knopf Books for Young Readers in exchange for an honest review. I've been struggling all day with what to say here. Much as I struggled to get to the end of this book. To be completely honest I probably shouldn't have started it. I don't even remember putting in the request and was thrown when I received an approval email. It really isn't my type of book but I figured it was there why not give it a go?


I think my biggest problem was the narration. The book is narrated by none other than Jacob Grimm. Yes one half of the infamous Brothers Grimm. Well, his ghost to be more specific. Sometimes I felt like he was just talking to hear himself speak, like it had absolutely nothing to do with the story. And the frequent bursts of German, yeah that got old fast. I found myself often having to reread things to try to make sense of them.


I didn't care much for a good portion of the other characters who made appearances in the book either. Jeremy Johnson Johnson was...alright, I'm still sort of on the fence about him. He had his moments when he made me smile possibly even laugh but they were too few and far between. On the other hand, for the most part I liked Ginger Boultinghouse. She was mischievous and funny.


It was extremely slow paced. Around 60%-ish it sort of took a turn for the creepy and I was hoping it would pick up, but it just didn't get any better for me. I gave it a shot but it just wasn't the right fit for me. And on that note I really don't feel it's very Middle Grade either. But maybe that's just me.


Thanks to Knopf Books for Young Readers for approving me to read and review this book even though it wasn't right for me. :)