The Fallen Prince (Keepers of Life #2)
by Shea Berkley


There is a magical realm that exists alongside the human realm, but it wasn’t always so. The firsts are beings who were created to nurture the land. The world was split into two realms, and the firsts were allowed to redeem themselves. Sadly, the majority continued with their self-indulgent behavior to the point where one of their own, a king, became so obsessed with power, he was secretly banished by the court in hopes his absence would calm the masses. But a spark of madness was ignited and not even the lost king's absence could curtail what he set in motion.

And don't miss the first book in the Keepers of Life series: 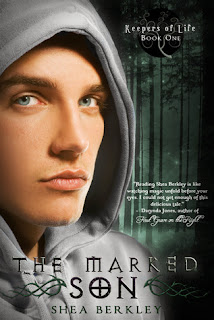 Seventeen-year-old Dylan Kennedy always knew something was different about him, but until his mother abandoned him in the middle of Oregon with grandparents he’s never met, he had no idea what.

When Dylan sees a girl in white in the woods behind his grandparents’ farm, he knows he’s seen her before... in his dreams. He’s felt her fear. Heard her insistence that only he can save her world from an evil lord who uses magic and fear to feed his greed for power.

Unable to shake the unearthly pull to Kera, Dylan takes her hand. Either he’s completely insane or he’s about to have the adventure of his life, because where they’re going is full of creatures he’s only read about in horror stories. Worse, the human blood in his veins has Dylan marked for death...


I'm an author of YA fantasy novels, which means I'm the luckiest person alive 'cause I get to spend my day playing with my characters. Some are totally cool, others aren't so nice, but they all bring something to the party.