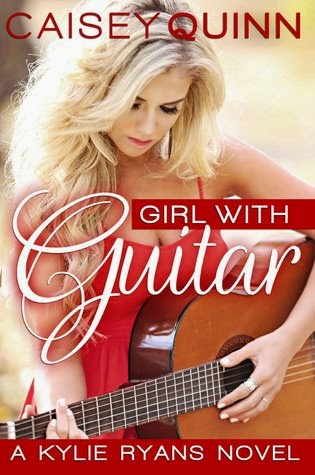 New Adult. MA 17+ Content.After Kylie’s dad dies in a freak accident, he leaves her with nothing other than her crazy step-mother, Darla, and the ability to play guitar. When Darla kicks Kylie out and she loses her job all in the same day, she hops a bus to Nashville determined to make her late father’s dreams come true.


Waitressing and saving her pennies to record a demo, her big break comes when she’s asked to join a tour going down the tubes with once platinum album-selling country music superstar Trace Corbin. But touring with Trace is hardly a dream come true since he’s pretty much drinking his career down the drain. If Kylie can’t pull Trace out of his rut, he’ll pull her and her dreams down with him.

This was an exceptionally fun book for me, and not just because it was such a great read. It all started when Jessica over at Lovin' Los Libros sent out a Tweet that started a domino effect of 1 click buying. There was this book she thought was going to be good, Girl With Guitar, and that was pretty much all it took. There were about 7 of us excited having just bought it. Then someone got the brilliant idea to do a read-along and it was another chain reaction and the next thing I know there  we were, diving into this book. Jessica, Danielle, Wendy, Trish, Chelsea and CeCe.  Thanks  girls for the fun and the convos during this read and I'm hoping there will be more fun like that in the future!

Music is a big part of my every day existence, so finding books surrounded by it is always a nice treat. Most of the time they're all about tattooed, bad boy rockers. Which isn't a bad thing of course but I grew up on country and so when I saw that the FMC of Girl With Guitar was an Oklahoma girl with dreams of Nashville in her heart that was all I needed. It was highly addicting and the only problem I had with this book...was putting it down.

Kylie is just a small town, country girl who's left with nothing after the tragedy of her father's death. And wanting to make him proud she takes what little belongings and money she has and jumps on a Greyhound to Nashville. Just a girl with her guitar and dreams of making it in the country music scene. An, it-only-happens-in-books-and-movies, encounter with Trace winds up having her finishing out his tour as his opening act. She's one of my favorite types of females to read. She's kind of got that wholesome sweetness to her but she doesn't take crap from anyone. She is really funny and full of snark. It makes for some great banter. I instantly liked her. She was very real.

She grinned at the audience and then leaned closer to the mic once more. "Oh, and I go right back to serving after this, so if you don't clap when I'm finished, I can't be held responsible for what might happen to your drink between the bar and your table."

Then there was Trace. He's not meant to be very likeable in the beginning. He's the platnum album selling star, full of arrogance and numerous issues including drinking. He's pretty jaded by the whole music scene and life in general. Closing himself off to the world and only showing an image of what's expected of him. Completely self-destructive! He was cold and rude and I really wasn't impressed. Until little by little, Kylie starts to crumble the wall he's built around himself. Then we start to see beyond the bad boy country star and see what's really there. And that's when little by little, he started to steal my heart.

"Kylie, if I ever again see you in a place like The Player's Club, or alone in a bedroom with a musician who wants nothing more than to fuck you, then I can't be held responsible for what I might do."

The chemistry between these two was explosive. Right from the start. Though in the beginning it wasn't exactly in a good way. His self-destructive behavior, drinking and not showing up to gigs, was threatening to crush her dreams. Kylie, not being one to sit back and allow herself to be treated that way and would get right up in his face and call him on all his stuff.

"You probably have about fifteen more minutes until some guy with deeper dimples and tighter jeans, if that's possible, comes along and steals your thunder. Because really, you're not all that damned special. But congratulations. I hope it makes you feel like a big man to leave me and Pauly high and dry while you go out and have a good time."

As time goes on an undercurrent of attraction starts to sizzle between them. Oh. My. God. I mean there's a lot of push and shove that really builds up the sexual tension between them. It takes it's time, but when it happens it's very hot and steamy. But hooking up only causes even more problems and heartache and gives them a whole new set of obstacles to tackle. It becomes a big case of will they or won't they be able to get past the lies, the past and the pressures of the world they live in.

Girl With Guitar was able to very easily pull me through a whole range of emotions. After reading the prologue alone I had a feeling I was in for an emotional ride and boy was I. There was laughter and anger and tears, from me haha. I felt so many things, though most of all I fell in love, with all of it. I can't wait to see what's to come in book 2!