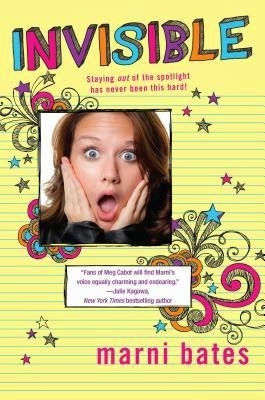 Jane Smith has survived three years of high school without making a single enemy, all by keeping a low profile. Not even her three best friends, Kenzie, Corey and Isobel, can say the same. But with Corey dating the lead singer from ReadySet and Kenzie in a relationship too, being invisible tends to be lonely.

But now she's written an article for her school newspaper that has accidentally snagged the attention of some celebrities. Turns out, people get really upset when their innermost secrets are splashed all over the front page. And new her well-ordered life is being blasted to hell, with results that are wildly unexpected.

This was a Goodreads First Reads win for me, a huge thanks to Kensington Publishing!!! This book was such a fun read. I honestly don't think I laughed so much with a book as I did with Invisible. The cast of characters was fantastic. We follow Jane Smith in this book. She's an Invisible. Their school is divided into two basic groups. The Notables, they're the popular kids, the jocks, the cheerleaders you know the types. And then there's the Invisibles. Pretty much everyone else. The kids who feel like, if they just didn't show up one day...would anybody really notice? Jane is adorkable. Her constant snarky, sarcastic remarks both internally and actually spoken were so funny. And her awkwardness and insecurities were very endearing. I could really identify with her, she reminded me a lot of myself at that age.


The problem is, that even among her fellow Invisible friends, she's sort of being left behind. Kenzie went from Invisible to in the spotlight over night with an awkward incident that went on YouTube and is now dating a Notable. Corey is dating a rock star and the two are now running in different circles with Jane feeling a bit envious and resentful that they don't make time for her anymore. And very lonely.


Jane starts out as this quiet, shy, push over basically. She avoids confrontation like the plague. Finds it easier just to go with what people want or think she wants than to actually voice her opinion. But then it just takes one tiny spark and little by little she goes outside her comfort zone. Piece by piece she breaks down that wall she's built. She grows tremendously until one day she blows. Of course it's after she does something, though completely by accident, pretty horrible and she's lost everything. Then she's finally able to stand up for herself and speak her mind. It's pretty awesome.


Oh don't worry, for those of you whom are lovers of all things love and swoony, like myself :D, there's even a sweet little bit of romance along the way. And just a tiny little triangle. Sort of. It's like so minor that even those of you who don't like them will think it's no big deal. We have Miles the gorgeous drama club guy. He's sweet and nice and a total gentleman. And we have Scott, he's sort of the new guy at school. He's kind of full of himself and sarcastic and works on the school newspaper as a photographer with Jane. Which one does Jane end up with? Well you'll have to read to find out!


There's actually two other books that came out before this. Awkward which is Kenzie's story. I haven't read it yet but it's on my list to buy ASAP. Then there's Decked With Holly which is a spinoff featuring the band ReadySet, the rock star Corey's dating I mentioned above? That's their band. You don't need to read either of those books to understand Invisible at all. Marni was pretty happy when she found out I hadn't read either of the other two books before reading Invisible and that I loved it so much. Just confirmed that it can stand alone. Seriously only took me one book to turn into a Marni Bates fangirl. This book is fantastic and  not only that she's SO SWEET! I highly, highly recommend this book if you're looking for something light that will also tickle your funny bone. You won't be disappointed. It's one of my top reads so far this year :)