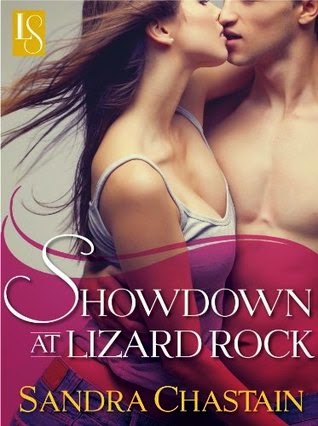 When King Vandergiff saw Kaylyn Smith standing on top of Lizard Rock protesting his company's construction of a private club around the town's hot springs, he knew he'd met his march! She vowed no surrender to the renegade who turned her every challenge into a seduction. King did his best to persuade Kaylyn that she'd run out of causes and was ripe for his love, but she didn't believe he would stay once his job was done. Could he show this wild gypsy that his wandering days had ended at her door?

I received this book from NetGalley and Loveswept in exchange for an honest review. This is book number two of three that I received from Loveswept last week that all happened to be reprints from the 80s and 90s. But unlike the previous title Double Dealing that I previously read, this one was exactly what I feared when realizing that it was indeed a reprint. There's a different feeling in contemporary romances from the past than there is from current books. I'm not even sure how to explain it.

An example from the beginning. King recalling what he'd heard about Kaylyn:


The body of Wonder Woman, the face of Helen of Troy, and the tenacity of a bulldog.

But it wasn't just lines like that which made it difficult to read. One of my biggest issues was the POV. It was third person and switched back and forth from King to Kaylyn. Which is fine, I love switching POVs. What I don't love is how it will literally switch from one paragraph to the next without even a break to let you regroup and realize that somethings changed. It was hard to keep focus and I don't want to have to concentrate that much on trying to make it through a book. It should be more effortless because the more I have to struggle through the less I'm going to like the book.


In protest of the land development, that King and his crew are about to start, of some tennis court spa type thing... Kaylyn climbs to the top of Lizard Rock in nothing more than a Lady Godivaesque wig and a bikini (eye roll) and plans to chain herself to the top of said rock. In a challenge before she closes the padlock she tells King she won't chain herself up there if he can, in two minutes, much like she had make it to the top of the rock as well. So in his briefs he does so. In a struggle (friendly one) she winds up chaining him to the rock. As reporters, police and the mayor all arrive and with his construction company and many other onlookers we get to witness numerous shouts from the crowd such as things like, now these are not direct quotes but more or less...


Are you making a political statement?

Of course she is. Her body is making a statement all of it's own. Look at her not an ounce of fat.

Aww she's wearing a bikini under her wig.

What's he wearing? Stand up!

It had my dormant inner feminist starting to stretch and pry her bleary eyes open. Because I mean who does that anyway? It was a bit offensive and I don't take offense to things that easily.


That's where I'm going to end this because I'm afraid this one started off rough for me and just didn't get any better. It's dated feel just wasn't a good fit for me. And I don't want to dip too far into the negative.

I'd still like to thank Loveswept for giving me a chance to read and review this book :)
Posted by Unknown at 11:00 AM