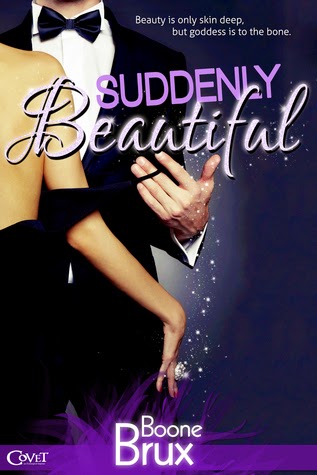 
Being the son of Aphrodite isn’t a walk in the clouds. Rebelling against his demi-god status, billionaire make-up mogul Toraos Stephanos fights to separate his personal life and the immortal world by swearing off demi-god girlfriends forever. Too bad his newest employee can't take the hint.

Though Nikki secretly pines for her smoking hot boss, no way will she jeopardize her job and independence professing her love to a guy so clearly out of her league. Too bad that leaves her with only imagining him naked and thinking evil thoughts about the new girl. After a single bottle of Ambrosia and one night of passion... Nikki finally thinks she has a chance with the man of her dreams. But the next morning, Tor pretends like nothing happened, leaving Nikki with an emerging drive for combat—after all, turns out she is the daughter of Ares and she's about to make her mama proud.

All is fair in love and war... and Nikki's not about to let anyone forget it.

I received a copy of this book from Entangled Publishing in exchange for an honest review! I had a feeling I was going to like this book, what I didn't expect was how much I truly did enjoy it! I've always been fascinated with Greek Mythology and so when I read the blurb I knew I had to at least give Suddenly Beautiful a try.


Thing number two I wasn't expecting? How incredibly funny this book was at times. I mean I was maybe a handful of pages in, 2 maybe 3, and I was bursting out laughing. From this:

In reality, she wasn't sure why she struggled so hard to hide her interest. The man never thought about anything other than work. She could probably dry hump his leg and he'd tell her to file something while she was down there.

That inspired some pretty hilarious visuals! And there was plenty more of that kind of thing where that came from. Especially when none other than the actual Gods themselves made appearances and decided to meddle in the business of their "children". Ares? Oh man, by far probably my favorite thing out of the entire book. I wish there would have been a lot more of him. He was exactly what one would expect from a Greek God. Larger than life, full of ego. Very much with an air of "I am Ares you may bow to me now!" Hilarious! Especially the interactions between Ares and Nikki. I could seriously go on and on with this.

This was alternating POVs between Nikki and Tor, which I love, so we got plenty of insight from both perspectives. Tor was a demi-god who didn't want to get by because of that fact. He turned his back to his abilities and his status and was a workaholic determined to make something of himself all on his own. He didn't make time for anything except work. Not even women. Nikki, his dedicated personal assistant, always there for anything he needed and absolutely in love with him. But he never really "saw her" Until one fateful night... And let me just say, the chemistry between Nikki and Tor was...intense. No exaggeration, I mean whenever things heated up between the two I'm surprised my computer didn't burst into flames. Loved. It.


Tor broke their kiss and twisted, smashing the emergency stop button with his fist. The elevator lurched to a halt, throwing Nikki against him.

What I wouldn't give to have been in an elevator with that man. Trust me it got even more heated from there
.


Overall I loved this book. The story, the characters, the humor, the romance. It was all just a little bit of perfection. Especially Ares. The funny that came out of scenes with him alone made it worth the read for me. Thank you so much to Entangled for sending me this book to read and review!!